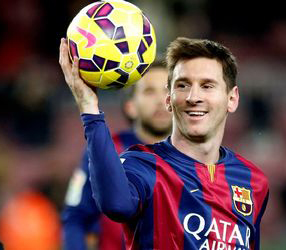 COULD German sportswear giant adidas have a hand in helping Manchester United net Argentine football great Lionel Messi?
A report in Spanish publication Fichajes has triggered speculation that by pooling resources the two could meet the buyout clause on Messi’s contract with Barcelona.
Due to expire in 2019, Messi’s contract requires potential suitors to pony up $300-million if they intend to tear the diminutive 27-year-old from the Spanish club.
Adidas recently signed on as kit sponsor for the English club from next season for $1,13 billion in total –  $113 million a year for the next 10 years – which could hypothetically provide manager Louis van Gaal with the funds he’d need for Messi.
The deal is considered to be the most lucrative sponsorship arrangement ever signed by a football club.
Van Gaal has already spent some $249 million on new players, but there is no club in the world which, given the war chest, would pass up the multiple Ballon d’Or winner.
Messi has been on Barcelona’s books for 14 years but is understood to have fallen out with management. He made cryptic comments about an uncertain future at this year’s Ballon d’Or ceremony where he was runner-up.
The UK’s existing transfer record was set at $87 million when United bought Argentine Ángel di Maria last year. A $300 million move for Messi would obliterate that.
Mike Makaab, the CEO of sports agency Prosport International, said to his knowledge a sponsor had never been involved in the signing of a player in such a way.
But sponsorships contributed to war chests and symbiotic relationships made obvious sense with respect to high-profile, expensive players, he said.
United shirts sporting the Messi name would provide an enormous windfall for adidas.
But a sponsor-club arrangement could throw up questions relating to Fifa’s financial regulations.
“They are against third-party involvement in the purchase of players, particularly if adidas were to have a say in which club a player moves to. It may also not be in line with Uefa’s Financial Fair Play rules,” Makaab said.
Given that Manchester United are not playing in the UEFA Champions League this season, the British press are claiming this would be the loophole the club needs to see such a deal through.Advertisement

This article was first published in Sunday Times: Business Times