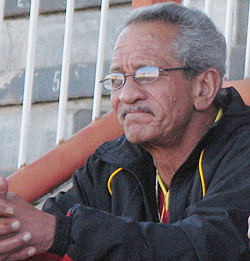 ERIC Rosen, the man who brought to Zimbabwe soccer, the club known as the Mighty Bulls, on Saturday bade an emotional farewell to top flight football as his club play their last game in the Castle Lager Premier Soccer League.
In a statement, Rosen said: “No feeling beats the feeling of winning and losing is a jawbreaker. Worse still is the feeling befallen the Bull’s camp, that of being relegated. Fourteen years in the premiership. 14 years!”
The quote sums up the sinking feeling in Rosen, his energetic wife Liz as well as the players and staff at Motor Action following their demotion to the lower reaches of Zimbabwean soccer.
When the flamboyant football club then known as Blackpool brought to life by a band of business people led by one Ronnie Chihota, Joe Masenda and Joel Salif folded at the turn of the century, Rosen chipped in.
Motor Action was born and the Bulls seized the challenge with typical gusto as Rosen explained.
“Our most momentous occasion was lifting the 2010 PSL Championship and thus becoming true to our nickname, the Mighty Bulls. We are the 2011 BancABC Sup8r Champions and lifted the Jubilee Independence Cup in 2005,” said a nostalgic Rosen.
“Other accolades include runners up in the 2012 Independence Cup, 2011 and 2012 NetOne Charity Shield, 2011 Mbada Diamonds Cup, 2000 BP Super Cup and bronze in the 2003 Woza Bhora Cup. All these are just the icing on our memorable journey.”
Rosen paid tribute to a host of players who have passed through the “Bulls Kraal” among them former soccer stars, Clemence Matawu the Bulls biggest export out of Africa and Charles Sibanda who were crowned Soccer Stars of Year in 2006 and 2010 respectively as well as Allan Gahadzikwa second best player in 2011.
Goal poacher Edmore Mufema and stylish winger Quincy Antipas, former Warriors hardman Tinashe Nengomasha, Bhekimpilo Ncube, Allan Johnson and Musa Mguni as well gaffers Rahman Gumbo, Keegan Mumba, Joey Antipas, David George.
“Even in our year of demise, the Mighty Bulls still managed to showcase the potential that exists in Zimbabwean football. Six young men adorned the red, black and yellow kit and made football enthusiasts look up with pride. Their future and that of Zimbabwe is very bright,” Rosen said without giving names.Advertisement

Rosen highlighted the need for junior football development and called on authorities to provide tax holidays for companies to sponsor and grow football as happens in countries like Lesotho, Botswana, South Africa and Nigeria in Africa.
Football has become one of the world’s biggest industries with billions changing hands seasonally and in particular the English Premier League in the form of player transfers.
As part of their social responsibility initiative, Rosen said Motor Action, for the past two years, have run a schools tournament was organised in Mutare.
The Mighty Bulls, according to Rosen, also made several donations to children’s homes in Mhondoro whilst playing in the 2011 CAF Champions League and the 2012 Confederations Cup.
“It leaves me to say thank you to all those in football. Those who love football like I do, ZIFA, fellow PSL members, PSL sponsors (past and present), Motor Action members, players, the technical staff, the media and most importantly the fans”
The charismatic Rosen did not forget “my beautiful Liz, who has been my rock through thick and thin and has become the Bulls number one supporter, deserves more thanks than I can give.”
Motor Action play their final home match against Caps United Saturday. Their biggest win to date remains their 5-0 goring of giants Dynamos in 2005.
Fixtures
Saturday: Motor Action v Caps United (Rufaro) SS9,
Sunday: Chicken Inn v Dynamos (Barbourfields), Black Mambas v Tripple B (Morris Depot), How Mine v FC Platinum (Luveve), Buffaloes v Monomotapa (Sakubva), Black Rhinos v Hwange (Rimuka), Harare City v Highlanders (Rufaro) SS9, Shabanie Mine v Triangle (Maglas)