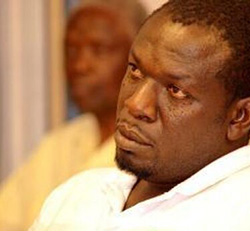 A STAGE play adapted from the late Yvonne Vera’s novel, Without A Name, is set to open this year’s theatre season here.
The book, which was transformed into a magnificent stage play by two of Zimbabwe’s renowned and celebrated playwrights in Raisedon Baya and Stanley Makuwe, was one of the most popular features at last year’s Intwasa Festival KoBulawayo.
It opens on 22 January at the Bulawayo Theatre.
Without A Name, the stage play, was directed by veteran actor and director, Memory Kumbota.
It features NAMA award winning actress Bathabiile Dlamini in the lead supported by another award winning actor, Zenzo Nyathi. The other cast members are Gift Chakuvinga, Nomvuyiso Mpofu and Musa Sibanda.
The play is set amid the turbulence, instability and uncertainties of Zimbabwe’s struggle for independence.
The story follows Mazvita whose dreams change drastically the night she meets freedom fighters in her village during a pungwe. She leaves her village for the city which promises to offer her promises of freedom.
In a statement, Raisedon Baya said they will be introducing a monthly theatre programme starting this month.
“This end of month shows is an initiative premised on the belief that our people are starved of relevant stories that speak to them directly and therefore would come to the theatre in search of such.
“In programming the end of the month shows we shall ensure good, quality, fresh and watchable performances that explore ideas close to our audiences,” said Baya.
He added: “We are also calling upon playwrights with interesting scripts that they would like featured on the end of month theatre shows to contact us. Our dream would be to program a diversity of voices and talent throughout the year.”
Another play that will make its stage debut this month, is Addicted, written by Harare-based playwright Rudo Mutangadura.
The play explores addictions often associated with women, from hair extensions to shoes.
It features fresh talent in Charmaine Mudau, Nomashawekazi Damasane, Musa Sibanda and Trevor Siyani.Advertisement