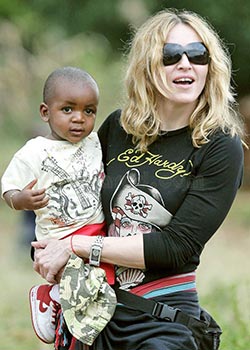 THE birth father of Madonna’s newly adopted twins has sensationally claimed he had no idea the move was permanent.
Adam Mwale has slammed the pop princess after discovering she had taken his four-year-old daughters Esther and Stella away from Malawi forever.
Speaking to The Mail on Sunday, Mwale said he was under the impression Madonna was fostering the twins.
He said:  “I was told from the start that Esther and Stella were going to a rich woman’s home abroad, that she would give them a good education, then return them to me, to live with me and help all of my family.
“Now you are telling me the adoption is permanent.
“That cannot be true – I don’t want it to be true. I am their father and I will always be their father.”
He branded allegations that he had “abandoned” the twin girls after their mother died in childbirth as “lies”.
He added: “It was me who took the girls to the orphanage after Patricia died.
“Everyone in the village knows I just wanted the best for them.
‘The orphanage boss told me it would be a wonderful chance for my little girls, and for their brother and sisters at home.
“I was told to agree with everything in court. I did not believe I would never see my girls again.
“I was standing with my brother-in-law who signed the consent forms with me, and we just continued to believe that I would always be the twins’ father and they would be coming home to me.”
After denying rumours that she had applied to adopt two more children from Malawi, Madonna confirmed the news earlier this month.
On her Instagram page, she wrote: “I can officially confirm I have completed the process of adopting twin sisters from Malawi and am overjoyed that they are now part of our family.
“I am deeply grateful to all those in Malawi who helped make this possible, and I ask the media please to respect our privacy during this transitional time.”
Madonna then later posted to her Instagram urging the public to donate or volunteer at the Home of Hope orphanage where Estere and Stelle lived for four years.
The Like a Virgin star now has six children after adding two more to her family.
Before the twins, two of her children were adopted, David Banda in 2006 and Mercy James in 2009.
She also has a daughter, Lourdes Maria Ciccone Leon, now 20, who she had with Carlos Leon.Advertisement

And she has a son, Rocco Ritche, 16, who she had with ex-husband Guy Ritchie.
The new additions to her family Esther and Stella are said to be settling in well after the move to America.
She was given the go-ahead to adopt the girls by the country’s high court.
During the judgement passed at the High Court in Malawi, Judge Fiona Mwale said: “[Madonna’s] extended family are equally on-board with the adoption.
“One of her sister’s and her husband have executed a declaration of their willingness to step in as guardian of the two infants should anything happen to the petitioner.”
Madonna posted a video of the girls singing a word-perfection rendition of Twinkle Twinkle Little Star.
Representatives of Madonna did not respond to requests to comment.