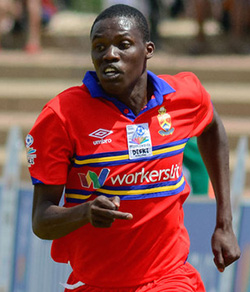 ZIMBABWE have been placed in Group L against Guinea for the 2017 Africa Cup of Nations (Afcon) qualifiers following the draw which was held in Cairo on Wednesday.
The other teams in the same group with the Warriors are Malawi and Swaziland. Group winners and the two best second placed teams will join hosts Gabon at the finals.
Kalisto Pasuwa, who is coaching the Zimbabwe Under-23, is expected to be confirmed as the substantive coach of the Warriors.
He could not be reached for comment on the draw.
However, it appears a fair draw for the Warriors with their biggest hurdle likely to be Guinea.
Zimbabwe have always struggled against the West African side, winning just one of their seven Nations Cup/World Cup encounters.
Midfielder, Denver Mukamba who featured in the last game against Guinea – a 3-0 defeat for the Warriors – said Zimbabwe could yet come good against them.
“Guinea are a very good side,” said Mukamba, who plays for the University of Pretoria in in South Africa.
“But I believe with good preparations it (qualification for the 2017 Nations Cup finals) can be done.
“They (Guinea) are very dangerous when attacking and they all go out — the midfielders and the strikers — in attack, but their defence is not very solid.