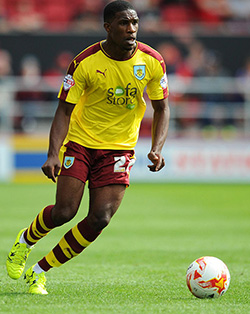 AS Warriors coach Kalisto Pasuwa prepares to announce the squad to play Zambia and Tanzania in warm up games today, he faces a dilemma on whether to consider England-based full back Tendai Darikwa ahead of the 2017 African Cup of Nations finals to be held in Gabon in January.
While Pasuwa wants to strengthen especially his defence before the start of the tournament, he is still weighing up his options.
The Burnley defender has previously been called to the Warriors but did not heed the calls with reports suggesting he wanted to play for England.
But he has endured frustration on the bench as he battles to hold a first team shirt at Burnley, after their promotion into the top-flight league term.
Darikwa, who is also comfortable playing in midfield, is reportedly worried that he has missed a good chance to represent England after falling down the perking order at Burnley.
The 24-year-old played for Burnley in the 1-0 defeat to Accrington in the League Cup and is yet to break through in the first team.
But the lure of playing at the African Cup of Nations could see Pasuwa using that element to call him up this time around. But the question that confronts Pasuwa again is whether Darikwa is still worthy an inclusion in the team.
Sweeden based forward Tino Kadewera and Poland based Gwaze are the other members of the team that will be part of the provisional team.
Chadya is also one of the names that has been included in the team that will play Zambia and Tanzania.
Zimbabwe will be making their third appearance at the continental football showpiece after qualifying for Tunisia in 2004 under Sunday Chidzambwa, before another appearance at the finals in Egypt in 2006 under the guidance of Charles Mhlauri.
The Warriors will get the ball rolling against Algeria on January 15 at the Stade de Franceville, before taking on Senegal at the same venue four days later.
They will conclude the group stages with a match against Tunisia at the Stade L’Ammitse on January 23.
Zimbabwe has never progressed beyond the group stages and Pasuwa will make history if he manages to advance to the last eight of the biennial soccer tournament.Advertisement