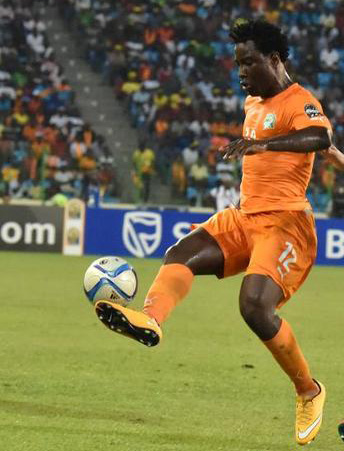 GHANA and Ivory Coast took their regular places in the African Nations Cup semifinals by beating Guinea and Algeria on Sunday as the tournament returned to normal after recent controversy.
Wilfried Bony finally came to life, scoring twice for the Ivory Coast, and a late Gervinho goal completed a memorable 3-1 win for the Elephants as they reached the last four for the fourth time in six tournaments.
Four-time champions Ghana comfortably dispatched surprise packages Guinea 3-0 to reach the semifinals for the fifth time in a row.
The Black Stars will face the hosts in Malabo on Thursday and the Ivorians, whose only title was in 1992 before the emergence of the so-called golden generation, play Democratic Republic of Congo in Bata on Wednesday.
Off the pitch, Tunisian Football Federation president Wadie Jary resigned from the Confederation of African Football (CAF) in protest at the manner of his team’s exit in a tumultuous tie against hostsEquatorial Guinea.
Tunisia were dumped out in Saturday’s controversial and thrilling match when the hosts were awarded a contentious stoppage-time penalty to equalise before beating the enraged North Africans 2-1 in extra-time.
The game ended with the Tunisians chasing the referee into the tunnel as riot police stepped in. Tunisia’s critics, however, pointed out that they were allowed to get away with brutal tackles and blatant time-wasting while leading 1-0.
The omens did not seem to be on Ivory Coast’s side when coach Herve Renard was ordered to cover his favourite white shirt early in the game with a pink vest because it clashed with the Algerians’ strip.
Renard, who wore the shirt in all six games when he led unheralded Zambia to the title three years ago, looked less than happy but his mood changed in the 26th minute when Bony headed in Max Gradel’s cross.
Arbi Soudani equalised early in the second half after exposing Ivory Coast’s defensive fragility only for Bony to strike again, leaping superbly to power a Yaya Toure free kick past Rais M’Bolhi against the run of play.
Despite several late scares, the Ivorians clung on to their lead before Gervinho added a third in the dying moments.
Christian Atsu scored twice, the first after three minutes and the other a delightful curling effort in the second half, and Kwesi Appiah was also on target for Ghana as they and Guinea opened the double bill in Malabo.Advertisement

“Every game we are better than the game before,” said Ghana coach Avram Grant. “There were chances, many chances and we scored beautiful goals.”