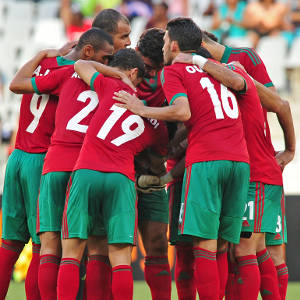 MOROCCO have been banned from the next two African Cup of Nations tournaments and fined after backing out of hosting this year’s edition due to fears over the Ebola outbreak.
The ban means that the Moroccans will not compete at the 2017 & 2019 competitions.
Accompanying the ban was a huge fine – $1 million for not hosting the tournament and €8 million and for damages.
“The CAF Executive Committee decided to suspend the national team of Morocco from the next two editions of the Africa Cup of Nations, 2017 and 2019, and to impose on the federation the regulatory fine of $1 million,” read a statement on the CAF website.
“The CAF Executive Committee decided by a separate measure to be borne by the Royal Moroccan Football Federation the sum of eight million and fifty thousand euros (8.05 million euros) in compensation for all material damage sustained by CAF, stakeholders and partners as a result of the decision not to host AFCON 2015.”
However, the Moroccans are said to be considering an appeal based on the fact that they requested a postponement on the advice of their health ministry.Advertisement