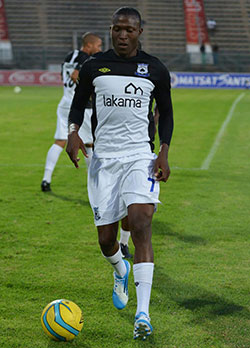 MARITZBURG United and Warriors striker Evans Rusike is hoping that Tendai Ndoro can transfer his PSL scoring form to the international stage at the upcoming Africa Cup of Nations.
Zimbabwe are returning to the AFCON finals after a decade’s absence, with Ndoro in fine fettle with 11 goals in the South African topflight – three more than closest rival Lebogang Manyama.
Besides the Orlando Pirates hitman, the Warriors also boast reigning PSL Footballer of the Season Khama Billiat in their frontline ahead of their third appearance at the tournament.
The Mamelodi Sundowns ace has been short-listed for the African Player of the Year based in Africa award along with Ugandan clubmate Denis Onyango following Downs’ triumph in the CAF Champions League.
Rusike, who has netted twice this season, suspects Ndoro will be a marked man in Gabon this month.
“Yeah, he’s in top form and we also need that in the national team. You win games by scoring goals,” said Rusike.
“But obviously there will be many teams focusing on him. It is a big stage for us to shine, but I think we have a strong team. It has been long for us and the last team we had was 10 years ago. We have been trying and trying, and I’m just happy that I’m part of the team.”
Rusike added: “It’s always nice to represent your country, especially in a tournament like this. It has been a long time that we have been clamouring for this, so we are really happy.
“I was still in school last time and some of the players went on to become stars. It’s nice to be part of such a team that is going there.”
Callisto Pasuwa’s side are in a formidable Group B, which includes 2004 winners Tunisia, 2002 runners-up Senegal and 1990 champions Algeria.
They will open their campaign on January 15 against Algeria at Stade De Franceville.Advertisement