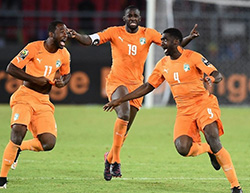 TITLE-HOLDERS Ivory Coast cleared a header off their goal-line in stoppage time to hang on to a 1-1 draw with Sierra Leone on Saturday to squeeze into the 2017 Africa Cup of Nations finals.
Jonathan Kodjia scored via a bicycle kick after 35 minutes for the Ivorians before a sell-out 25 000 crowd in Bouake but Kei Kamara equalised on 67 minutes with a glancing header following a free-kick.
It was Kamara, back after a self-imposed one-year exile having accused Sierra Leone officials of disrespecting him, who almost took his country to the finals after a 20-year absence.
Sierra Leone were awarded a corner five minutes into stoppage time but a far-post Kamara header was cleared off the line.
Ivory Coast qualified for a seventh straight Cup of Nations by winning Group I with six points after drawing twice against Sierra Leone and taking four points off Sudan.
Sierra Leone finished with five points and Sudan with four.
Algeria, Cameroon, Egypt, Ghana, Guinea-Bissau, Mali, Morocco, Senegal and Zimbabwe secured places ahead of the final round and hosts Gabon are automatic participants as hosts.
Another 14 matches are scheduled for Sunday with the remaining five places up for grabs.
Ethiopia fell behind against Seychelles in Hawassa before goals from Getaneh Kebede and Saladin Said either side of halftime brought a 2-1 win and hope of qualification as one of the best two runners-up.
It was the sixth goal of the qualifying campaign for Kebede in Group J and moved him to the top of the scorers charts.
Fouad Al Triki scored a late goal as Libya shocked Cape Verde 1-0 in a Group F match interrupted when a dog wandered onto the pitch in Praia.
Cape Verde out
Defeat eliminated Cape Verde, who were briefly ranked No 1 in Africa this year and had been seeking a third consecutive Cup of Nations appearance.
A brilliant goal from Manchester City teenager Kelechi Iheanacho on 78 minutes earned already-eliminated Nigeria a 1-0 Group G win over Tanzania in Uyo.
The Super Eagles took a short corner and the striker moved across the edge of the penalty area before unleashing a left-foot thunderbolt into the roof of the net.
Group H winners Ghana lacked numerous first choices, including Andre ‘Dede’ Ayew and Asamoah Gyan, and were held 1-1 in Accra by Rwanda.Advertisement

Samuel Tettah put the Black Stars ahead midway through the opening half with a low shot and Muhadjir Hakizimana levelled off a free-kick seven minutes from time.
Mozambique jumped from fourth to second in the same mini-league after a last-gasp goal earned a 1-0 win over Mauritius in Maputo.
Cameroon cruised to a 2-0 victory over bottom-of-the-table Group M team Gambia in Limbe.
Benjamin Moukandjo converted a first-half penalty for a foul on Karl Toko Ekambi, who scored the second goal soon after halftime.
A dismal run by Angola in Group B extended to five matches without a win when they were held 1-1 by Madagascar in Luanda.
Bapasy put the visitors ahead during the opening half with a glancing header off a corner and Gelson levelled nine minutes into the second half.
Senegal finished with a perfect Group K record thanks to a predictable 2-0 win over Namibia in Dakar through goals from Balde Keita and Famara Diedhiou.