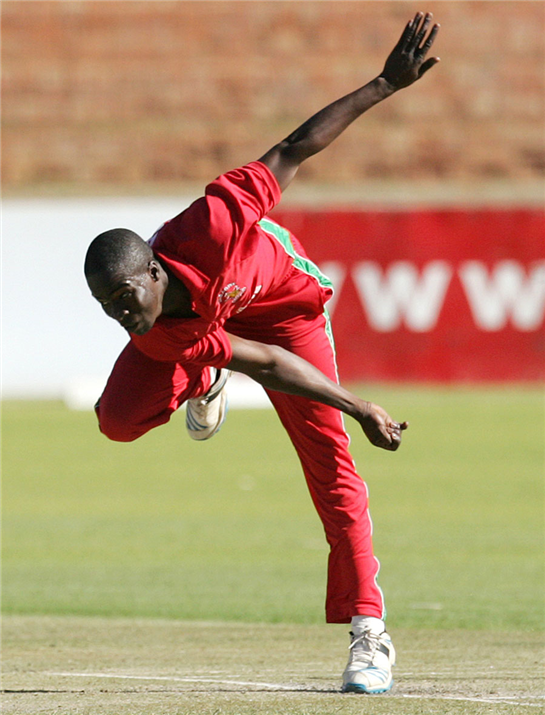 Afghanistan 259 (Shafiqullah 56, Shenwari 40, Tiripano 5-63) beat Zimbabwe 159 (Mutumbami 64, Sharafuddin 3-29) by 100 runs
AFTER losing the first two games, Afghanistan had their backs to the wall, needing nothing less than wins from their two remaining games to show what they were made of.
After scraping through on Tuesday by two wickets, they trounced Zimbabwe by 100 runs, thanks to their seamers who looked primed to take the game after reducing the hosts to 29 for 6 in pursuit of 260. This was Afghanistan’s first drawn ODI series against a Full Member.
The trouble began in the sixth over when Regis Chakabva fell to Aftab Alam for 9, before Brendan Taylor departed the following over flicking Mohammad Nabi to cow corner.
The run out of Sean Williams unsettled them further and in the following over, Dawlat Zadran struck twice, bowling the in-form Sikander Raza and taking a return catch to get rid of Elton Chigumbura.
Three balls later, Mirwais Ashraf trapped Malcolm Waller lbw, walking across the stumps. The hosts were reeling at 29 for 6 and the task ahead of the debutant wicketkeeper Richmond Mutumbami was not just survival but to match the required run rate, that had already passed six.
After a quiet beginning, Mutumbami opened up when he went down the track to Mirwais. Mutumbami and Maruma batted positively, with the former scoring at nearly a run a ball.
Though Afghanistan still held the edge, once the stand passed 50 and edged closer to a century, there was a glimmer of hope for the Zimbabweans.
The pair batted together for nearly 20 overs and had added 97 before the left-arm spinner Sharafuddin Ashraf struck, trapping Maruma lbw on the sweep.
The sweep led to Mutumbami’s downfall as well as he only managed a top edge off Sharafuddin and was caught by the wicketkeeper. The match predictably ended soon after Zimbabwe’s highest scorer departed and in the 38th over, Aftab Alam sealed the win by bowling Donald Tiripano.
It was a memorable game with the ball for Tiripano, though, as he picked up his maiden five-for in ODIs. The right-arm seamer sent back the openers by the eighth over, before taking three lower-order wickets.
A fourth-wicket stand of 64 between Nasir Jamal and Samiullah Shenwari stabilised Afghanistan. Jamal batted patiently, scoring only two fours in his 39 before he was run out. When Shenwari departed four overs later, the visitors were in need of a rebuild at 146 for 5.Advertisement

The recovery came via Nabi and wicketkeeper Shafiqullah, who added 72 in just 8.5 overs. Shafiqullah’s 56 off 43 balls gave Afghanistan the impetus as they headed towards 250. He launched Tiripano for two sixes before the bowler had the last laugh, getting him caught at short third man.
He finished with 5 for 63 to bowl out the visitors with five balls to spare, but 259 turned out to be more than sufficient.