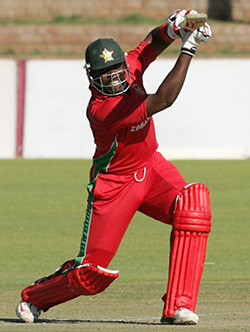 Afghanistan 264 for 8 (Ahmadi 56) beat Zimbabwe 261 for 8 (H Masakadza 84, Taylor 53) by 2 wickets
AFGHANISTAN kept the four-match series alive with a win in the tightly-contested third ODI in Bulawayo.
It is only the second win over a Test-playing nation for Afghanistan, whose national team was formed in 2001. They beat Bangladesh in the Asia Cup in March, also in the 50-over format.
On Tuesday, none of their bowlers took more than two wickets and only one of their batsmen got to a fifty – Javed Ahmadi with 56 – but they still overpowered Zimbabwe by two wickets, in a chase of 262, with two balls to spare.
That brought the series scoreline to 2-1, in favour of the hosts, with one to play.
Zimbabwe were inserted and were provided a solid platform by Hamilton Masakadza – who top scored with 84 – and captain Brendan Taylor, who added 109 at five an over after Sikandar Raza was out cheaply.
Sean Williams, batting at No. 4, also contributed to the cause with a brisk 49, but a flurry of wickets in the final six meant they finished with a slightly under-par 261 for 8. Medium pacer Aftab Alam was the pick of the bowlers for Afghanistan, picking up two wickets in a tidy spell.
Afghanistan’s chase was off to an ideal start, with the openers, Usman Ghani and Ahmadi, adding 83 at over a run a ball. A duck followed for No. 3 Noor Ali Zadran, though, with Ahmadi falling not long after to make it 112 for 3 in 20.
While Nasir Jamal and Samiullah Shenwari ensured no collapse ensued, their 54-run stand used up 14 overs, meaning the lower order was faced with a very stiff asking rate towards the end. Captain Mohammad Nabi launched the late charge with 42 off 40 before being run out after consecutive sixes off part-timer Raza.
If Zimbabwe thought that was the end of things, they didn’t do so for long: No. 9 Dawlat Zadran blocked the first ball he faced, and slammed two sixes off the next two deliveries in the same Raza over.
He proved to be the fatal thorn in Zimbabwe’s side, striking two more sixes to tilt the thriller in Afghanistan’s favour.
The last of those big blows came in the final over, when his side needed four off three. Afghanistan will need a similar team performance if they are to tie the series in the final ODI, which is scheduled for July 24.Advertisement

Afghanistan joined the International Cricket Council as an affiliate member in 2001, after many of the original players had learned the game in refugee camps over the border in Pakistan.
Since then, they have qualified for four major tournaments – the ICC World Twenty20 events in 2010, 2012 and 2014, and the 2015 World Cup, while gaining one-day international status in 2011 and ICC associate status in 2013.