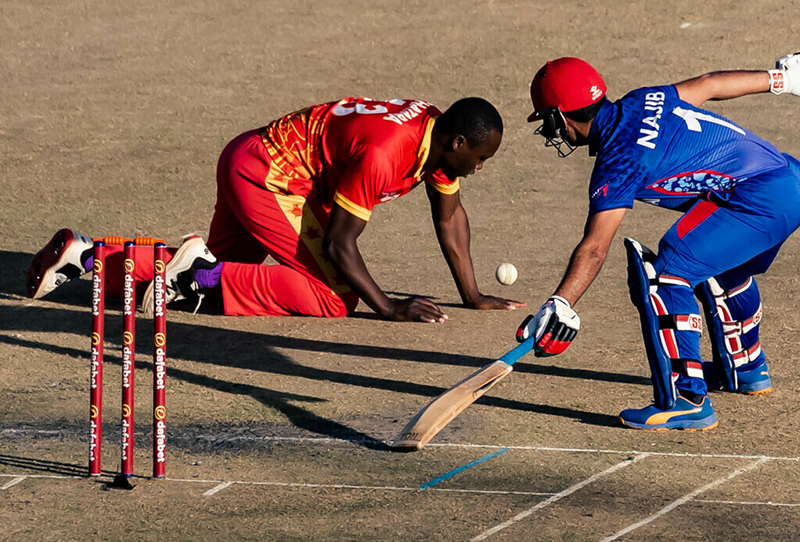 HARARE: Teenage debutant Noor Ahmad was the four-wicket star as Afghanistan beat Zimbabwe by 35 runs in Harare on Tuesday to complete a 3-0 Twenty20 series whitewash.

One of four changes to the team that won on Sunday, the 18-year-old left-arm wrist-spinner took a remarkable four for 10 in a four-over spell that helped restrict Zimbabwe to 90-9 in their 20 overs as they chased Afghanistan’s 125-8.

“Getting the man of the match award on my debut is wonderful. It is a dream of every player to play for their national team. I am humbled,” said Ahmad.

“Before the match I spoke to Rashid and he told me I have to bowl in the right areas.

“I feel proud to bowl with Rashid and other senior players. It is very tough to get a place in this bowling attack.

“I work very hard and it was one of my dreams to play here with big stars like Rashid and Nabi.”

Zimbabwe captain Craig Ervine said: “Noor Ahmad took the game from us. It is tough enough to play Rashid in the middle overs, but (then we had) another guy to deal with.

“There were key moments in most of the games when we had Afghanistan on the back foot. We had done so well to get runs and then we lose a lot of wickets, handing back the match.”

Sharafuddin Ashraf, a slow, left-arm orthodox bowler, took two wickets as the tourists completed a white-ball tour sweep having already won all three games in the one-day series between the sides.

After winning the toss and choosing to bat, captain Mohammad Nabi top scored with 31 for Afghanistan in the dead rubber.

Batting at number six, the all-rounder scored at a run a ball and struck two fours.

Nabi was caught by rival skipper Craig Ervine at extra cover off the bowling of Luke Jongwe from the final ball of the 18th over when he sliced a full, wide delivery.

Najibullah Zadran, tormentor in chief of Zimbabwe in the previous T20 triumphs with innings of 44 and 57, lasted only four balls before being caught by debutant wicketkeeper Clive Madande off a Ryan Burl googly.

In reply, Zimbabwe reached 40-2 before a batting collapse saw seven wickets tumble for the addition of only 29 runs.

Burl, batting at number seven, top scored with 15 off 24 balls, including one four, before being caught and bowled by Fazalhaq Farooqi.

Opener Wessley Madhevere made 14 and tail-ender Ainsley Ndlovu was 13 not out.