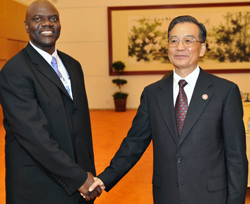 This is the full text of Deputy Prime Minister Arthur Mutambara’s address to the Africa-China Business Summit held in Sandton, South Africa, on April 17, 2013:
IT IS important for us to understand what we mean by saying China’s growth model is shifting. Over the last couple of years, the model has become less resource-intensive as the economy moves into middle income status. As its economy grows and prosperity spreads, it has become more consumer and services driven.
The growth trajectory has been slowing down and a mid-April 2013 report shows a growth rate of 7.7% down from the projected rate of 7.9%. The traditional above 10% growth rates are now history. All these changes require strategic positioning of Africa’s relations with China.
What is Africa’s optimum response vis-à-vis this new reality? Furthermore there is a new government in China led by President Xi Jinping and Premier Li Keqiang with a particular emphasis on the social and personal aspects of economic success encapsulated in the notion of the China Dream which seeks to reimagine prosperity and reshape consumerism in China. The goal is to catalyse a new aspirational lifestyle that is innately sustainable for the emergent middle class in China. These new developments have implications for China’s commercial relations with Africa.
However, as we discuss how African countries need to respond to China’s shifting growth model, it must be acknowledged that African countries have not effectively engaged the Chinese, even before the model started to change. Hence we need to pick up lessons on what has characterised the Africa-China relationships so far, and then use that as basis to explore future partnerships as the Chinese economy changes.
There have been two types or classes of critiques of the Africa-China economic relations. The first category is what can be termed Western-inspired criticisms and the second set consists of genuine grievances leveled by the Africans themselves. Before we delve into a detailed assessment of these challenges, the key theme and central message in this treatise must be laid out up-front.
African countries must NOT BLAME China or any other foreign power or institution for their problems. We must assume responsibility for our own circumstances, take charge of our economies and create sustainable solutions to impediments that confront us.Advertisement