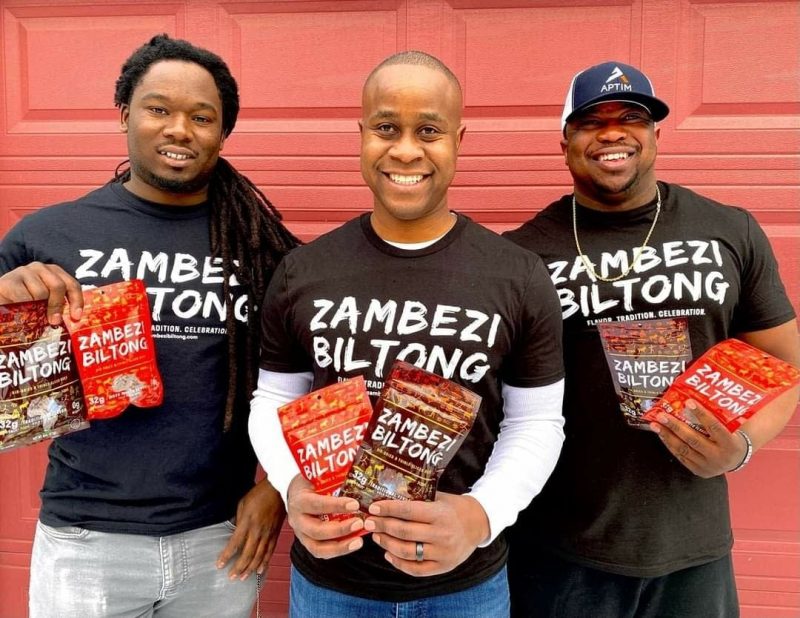 From left, Mwila Kapungulya, Ranga Chinongoza, Henry Muchineripi founded Zambezi Biltong as a way to introduce African flavours and tradition to Minnesota, US.
Spread This News

BEEF jerky is sold practically everywhere. But a new product is hitting the shelves across the Twin Cities that adds a traditional African twist to the popular snack.

Biltong is made by marinating and then air-drying meat, once used in Africa as a necessity to preserve the meat after long hunts. Throughout the years, the delicacy has shifted from a way to survive to a method to connect with family and friends. Today, biltong’s accessibility in Africa is similar to that of jerky here — sold in grocery stores and small markets, even at breweries and public gathering spaces.

Mwila Kapungulya of Savage, Minn., was born and raised in Zambia but moved to Minnesota when he was 17. During his time living here, he connected with two other African men — Ranga Chinongoza and Henry Muchineripi, both from neighbouring Zimbabwe.

Together, the three discovered a shared desire to connect their lives in Africa with their adopted homes here in Minnesota and decided biltong would be the perfect way to bring a little African flavour and tradition to the Midwest.

“They have that earthiness that, you know, coriander, rosemary, black pepper, salt. … And then we also have the moto moto, which in Bantu language means fire fire. That’s the literal translation.”

Kapungulya said they have a third flavour in the works that they expect to release in the coming months.