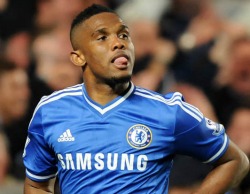 FOUR time African Footballer of the Year winner and former Cameroonian national team captain Samuel Eto’o is coming to Zimbabwe next week.
The Cameroonian striker won the African Footballer of the year award three times in row in 2003/4/5 and in 2010.
However, his visit has nothing to do with football.
The African giant is coming to speak to young people about HIV and STIs in the hope that his popularity will help spread the message on the dangers of the two diseases which are mainly sexually transmitted.
Eto’o will be a guest at this year’s International Conference on Aids and STIs in Africa (ICASA) running from the 29th of November to 4th December.
Confirming the coming of decorated striker, local ICASA Communications manager, Tariro Makanga, said Eto’o is expected in the country next week and will address thousands of delegates on the 30th of November.
“Eto’o is a favourite of many soccer fans and non-soccer fans. He is passionate about young people.
“As such, we believe if he interacts with young people as they put their voices on HIV and STI issues in Africa it will be beneficial to them as they can in the process learn how he has made it this far,” said Makanga.
“He will be at the Community Village where even those who are not registered can have access to him.
“The Cameroonian football legend is basically a role model to many young Africans and his career tells an integrity story on its own.”
Eto’o played for Spanish giants Barcelona and Real Madrid; English Premier League’s Chelsea, and Inter-Milan in Italy, among some top clubs.
At one point he became the highest paid player in the world when he was playing for FC Anzhi Makhachkala of Russia.
Advertisement