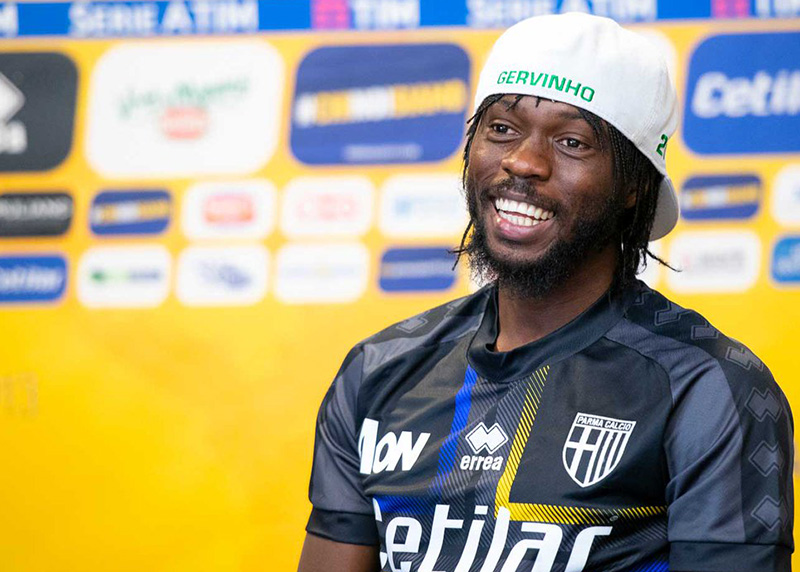 Ivorian veteran Gervinho was the star African in Europe at the weekend, scoring two late goals as mid-table Parma snatched a 3-3 Serie A draw at runaway leaders Juventus.

The Senegalese international tried valiantly, on an emotional day for the club, to fill a gap that would have been occupied by record signing Argentine striker Emiliano Sala, whose crashed plane has been found on the English Channel seabed a fortnight after setting off for Cardiff. Niasse did not garner the same headlines when he was signed on loan from Everton in January, but produced a lively performance, going close to opening his account inside two minutes. Bobby Reid got both goals in a 2-0 win that boosted the Bluebirds’ chances of survival.

The Democratic Republic of Congo striker had a game to forget in the 5-0 humbling by Chelsea although he clearly demonstrated his skills belong in the other side’s penalty area. The 26-year-old Germany-born player was responsible for conceding a penalty — which Eden Hazard converted — in clumsily bringing to ground Cesar Azpilicueta, although the offence appeared to be outside the box. He was fortunate not to have an own goal awarded against him as David Luiz’s header four minutes from time took a big deflection off him.

The Ivorian defender earned a recall to the team from Ole Gunnar Solskjaer and produced an assured display in his first Premier League appearance since being sent off in the 4-1 home win over Bournemouth on December 30. The 24-year-old will hope, based on his performance against an admittedly limited Leicester attack, for a longer run in the team ahead of a huge month as United face Paris Saint-Germain in the Champions League, Liverpool in the league and Chelsea in the FA Cup.

The 30-year-old Moroccan temporarily abandoned his place in a three-man defence to nearly score with a header after two minutes as Real Betis upset the La Liga title hopes of Atletico Madrid with a 1-0 home victory. Feddal was denied by Slovenian goalkeeper Jan Oblak, who leapt to pull off a superb save.

Ivorian Gervinho was the hero for Parma in a come-from-behind performance which frustrated Cristiano Ronaldo’s Juventus. Gervinho’s late brace matched Ronaldo’s double as champions Juventus had to settle for a point in a 3-3 stalemate. The former Arsenal man threw his side a lifeline on 74 minutes and grabbed a point at the death with his eighth goal this season.

Koulibaly produced a towering performance for second-placed Napoli in a 3-0 win over Sampdoria. The 27-year-old’s dramatic sliding tackle thwarted Fabio Quagliarella’s bid to set a new record of scoring in 12 consecutive Serie A games. When Napoli were awarded a penalty, there were calls of “Kalidou, Kalidou” from the crowd for the Senegalese defender to take it following his solid display, but coach Carlo Ancelotti opted for Simone Verdi, who stepped up to convert in the final minute.

Hakimi’s fine season in yellow and black, on loan from Real Madrid, continued in a 1-1 draw at Eintracht Frankfurt with the 20-year-old Moroccan full-back putting in yet another fine performance. While he is still adjusting to the defensive responsibilities as one of the leaders of a young Dortmund defence, he was again impressive in attack. His precise crosses from the left flank have been a feature in Dortmund’s excellent season.

Ujah’s return to Mainz has been frustrating with the Nigerian international unable to cement a starting spot. He came off the bench in the 58th minute for Jean-Philippe Mateta and showed speed as Mainz tried unsuccessfully to overturn a three-goal deficit at Augsburg. While his final touch needs work, he has the attributes to succeed in the Bundesliga.

The 23-year-old Ivorian forward continued his magnificent season for Lille by netting the second goal in a 4-0 thrashing of Nice. Pepe has now scored 16 times in 23 Ligue 1 games this campaign, second only to PSG’s Kylian Mbappe.

Cameroon international N’Jie scored just his second goal of the season as free-falling Marseille lost again at Reims. The 25-year-old, who has only started twice in the league this term, came off the bench to grab a late consolation goal.