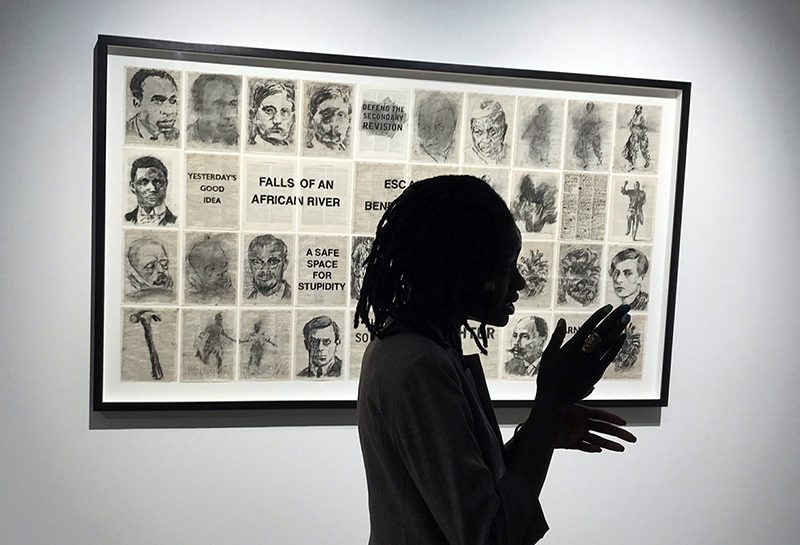 A visitor looks at charcoal drawings by artist William Kentridge paying homage to Africans' service in World War 1, at the Goodman Gallery in Johannesburg
Spread This News

JOHANNESBURG: Amid the fanfare marking the 100th anniversary of the end of World War I, little has been said about crucial participants in the conflict: Africans.

More than 1 million African soldiers, labourers and porters were vital actors in the war in Europe and especially in battles on the African continent, yet little commemorates their role.

This is slowly changing as historians and artists highlight contributions made by Africans in the war from 1914 to 1918.

“Britain relied heavily on Africans for labor on the Western Front and during the Egypt and Palestine campaign. Their role was to carry supplies and ammunition, construct camps and dig trenches. The campaigns in Africa could not have been fought without the contributions of Africans on both sides. This is not well known, but that story is starting to be told.”

As part of the move toward honouring Africans’ role, Britain’s Prince Harry last week met with military veterans in Zambia, where some say World War I truly ended with German troops laying down arms on Nov. 25, 1918. Marking that anniversary last week, Germany’s ambassador said he was deeply moved to lay a wreath with his British counterpart “at the commemoration of the real end” of the war.

With “Mimesis: African Soldier” artist John Akomfrah created an installation highlighting the role of Africans and honouring their sacrifices. The work, at the Imperial War Museums until March 31, is projected on three screens and blends archival material with new footage filmed by Akomfrah around the world.

“The most important thing for me, the takeaway, is that African soldiers fought in this war, that they played a variety of roles in the war as foot soldiers, as carriers,” Akomfrah said on the museums’ website. “Every facet, every avenue, every job in the war, if you look long enough, you will see someone of either Asian or African origin/heritage in that role.”

More than 25,000 black South Africans served in the South African Native Labour Corps, shoring up Britain’s acute labor shortage during the war. South Africa’s white minority colonial rulers refused to allow blacks to carry arms or serve on an equal basis with whites, but they agreed to allow them to work as porters to deliver supplies and weapons to the front line.

The black South Africans were praised for their productivity and efficiency, but they were kept in conditions similar to prisoner of war camps, according to contemporary observers.

With “Kaboom!” and the film installation “The Head & The Load” South African artist William Kentridge also pays homage to Africans’ service and asks why Africans served in the war of their colonial oppressors.

In charcoal drawings Kentridge depicts haunted African landscapes with bits of text such as “The poems are not our own” and “They hope we will die and not return.” The film installation explores “the contradictions and paradoxes of colonialism that were heated and compressed by the circumstances of the war,” Kentridge wrote in a program for the exhibit at the Goodman Gallery in Johannesburg.

“The Head & The Load” was shown earlier this year at the Tate Modern in London and will be shown in New York at the Park Avenue Armoury in December.

One of the most tragic WWI events involving Africans was the sinking of the SS Mendi. The ship was carrying black South Africans from England to France, where they were to deliver supplies to the front line. On a foggy night in February 1917, a much larger British mail ship struck the Mendi, which quickly sank, killing 607 men. It was the largest single loss of life for black South African non-combatants in the war.

The deaths of those on the Mendi brought South Africa’s all-white House of Assembly to stand in silence in March 1917, as a mark of respect.

More than 100 years later, the Africans who died on the Mendi were honoured again when visiting British Prime Minister Theresa May gave South African President Cyril Ramaphosa the ship’s bell that had been recovered from the wreck.

“The gift of this bell is like returning their souls to the land of their birth,” Ramaphosa said of the South Africans whose bodies were never recovered from the English Channel. “May their souls rest in peace.”