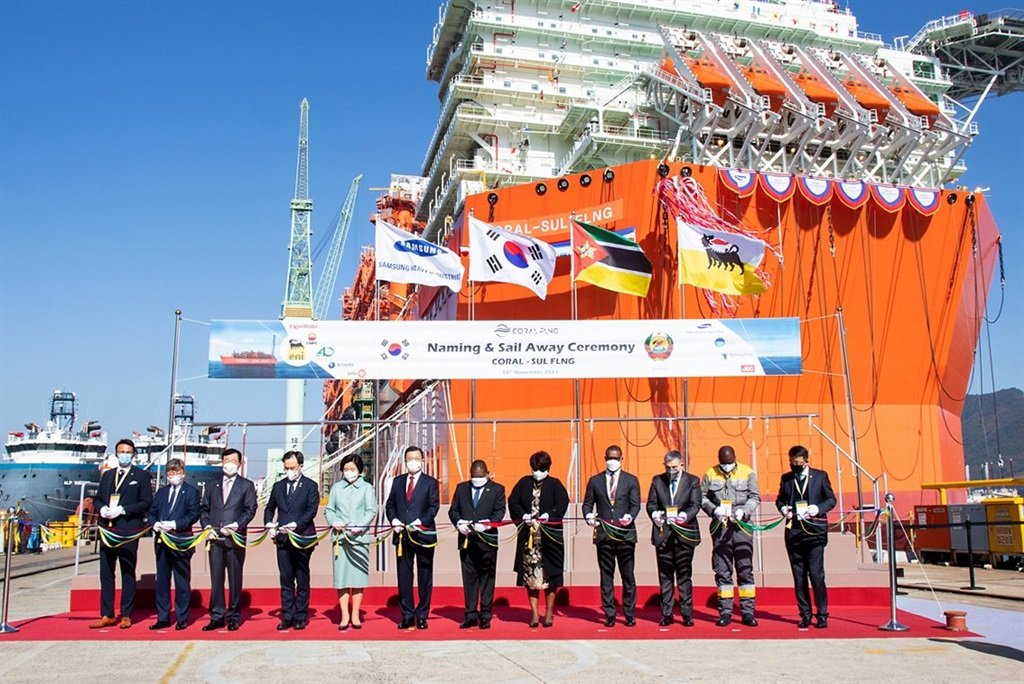 The floating plant – known as the Coral Sul FLNG – arrived in Area 4 of the Rovuma Basin this week, Mozambique’s National Petroleum Institute announced.

The plant is critical to the $7 billion Coral South project, which is operated by Italian oil and gas company Eni. It will produce and sell gas extracted from the southern part of the field.

The 220 000 ton vessel, the main component of which was constructed by Samsung Heavy Industries in South Korea, is the first FLNG built for deep waters and the first specifically built for Africa. Some 432 meters long and 66 meters wide, the plant has the capacity to liquefy 3.4 million tons of natural gas per year.

It will be linked to six subsea gas producing wells, with its LNG earmarked to be sold exclusively to BP under a 20-year offtake agreement signed in 2016.

Gearing up for production

The Coral Sul FLNG embarked on its voyage from South Korea on 15 November and entered Mozambiquan waters on 3 January.

According to the National Petroleum Institute, the vessel’s arrival is “a milestone in the project’s implementation”.

Since arriving in Mozambican waters, a complex process of anchoring, surveys, inspections and certifications had begun with a view to issuing the vessel with an operating license so that production can start as planned in the second half of the year.

According to Eni’s website, the installation campaign includes mooring and hook-up operations at a water depth of around 2000 meters by means of 20 mooring lines that weigh 9000 tons in total.

The Coral South project will see Eni providing specialist training for more than 800 Mozambican workers, who will be employed in the project’s operational phase. The company said it has committed to a “huge programme of work” for local communities to improve their access to basic services such as education, clean water and health care, while supporting long-term, diversified, sustainable socio-economic growth.

Coral South is one of a number of energy projects located in the Rovuma basin.

Also under construction is TotalEnergies’ substantially larger $20 billion Mozambique LNG project. Work is yet to resume after the site was evacuated in March last year as a result of nearby Islamic State terrorist attacks.

Still awaiting a final investment decision is ExxonMobil’s $30 billion Rovuma LNG project, which was delayed in 2020 in light of an oil price collapse amid the Covid-19 pandemic.

“It is great news for Mozambique and the region that Coral FLNG is now in Mozambique, ahead of commissioning,” said Paul Eardley-Taylor, Standard Bank’s head of oil and gas for Southern Africa.

“3.4 million tons per annum of LNG can support 4 GW of base load cleaner gas to power and demonstrates that Mozambique’s LNG developments continue, despite the pandemic and other challenges,” he said.

Across the border in South Africa, the government has long paid lip service to developing a gas economy, but the pace has been frustratingly slow for many industry proponents. Climate concerns have made it more difficult than ever for oil and gas companies to pursue new projects – as shown by fierce opposition to Shell’s plans to conduct seismic surveys off SA’s Wild Coast.

The arrival of the Coral Sul FLNG is yet another reminder of where South Africa could have been, if it had sprang into action sooner to develop a local gas economy said Niall Kramer, an independent energy consultant.

“It’s just frustrating that the world is moving ahead and we are talking about things and not doing what we said we would do,” he said. “I think that there’s almost an intentional delay in the assumption that if government talk about it and set up a committee and have a meeting, that’s enough to pacify business. But it’s not.”

South Africa needs to develop an environment that’s attractive to investors in gas, the likes of who are investing in neighbours like Nambia and Mozambique despite the political and security challenges, said Kramer.

While he recognises there has been some progress – most recently was the release of a draft gas master plan – Kramer said South Africa’s gas and renewables policy and execution suffers from “sheer ineptitude” and a “lack of vision” on the transition path toward renewables.