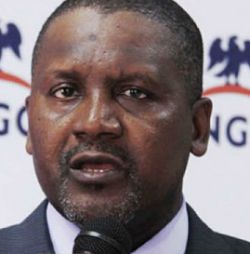 Africa’s richest businessman Aliko Dangote has reiterated his desire to buy Arsenal.
The Nigerian, whose fortune is estimated at £11.5 billion, was reportedly first interested in buying a stake in the Gunners when former director Lady Nina Bracewell-Smith was selling her stock in 2011.
And Dangote now believes that the building of a new oil refinery in his country will give him the necessary funds to launch a bid for the club.
Arsenal’s current majority shareholder is American tycoon Stan Kroenke, who has a 66.64 per cent holding and remains committed to the Premier League club for the long-term.
Uzbek magnate Alisher Usmanov controls around 30 per cent and has also expressed no desire to offload any of his shares.
Nevertheless, last month Dangote, whose business interests include sugar, flour and oil, stated he remained keen to become part of the Emirates Stadium club sometime in the future.
In a fresh interview with BBC World Service Hausa, Dangote indicated once his work in the establishment of an oil refinery in his homeland – set to be the largest in Africa – is complete, then he would consider revisiting his interest in making a move at Arsenal.
“When we get this refinery on track, I will have enough time and enough resources to pay what they are asking for,” he told the channel.
“There were a couple of us who were rushing to buy and we thought with the prices then, the people who were interested in selling were trying to go for a kill.
“We backtracked because we were very busy doing other things, especially our industrialisation.”
Dangote feels Arsenal, who last season retained the FA Cup, can mount a challenge for top honours again, albeit perhaps with a different outlook from the boardroom.
He added: “They are doing well but they need another strategic direction.
“They need more direction than the current situation, where they just develop players and sell them.”Advertisement