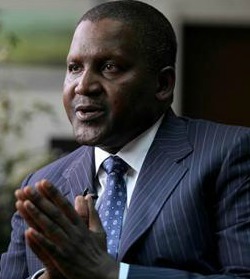 AFRICA’S richest man, Aliko Dangote, plans to invest up to $8 billion to build a Nigerian oil refinery with a capacity of around 400,000 barrels a day by late 2016, the tycoon told Reuters on Tuesday, almost doubling Nigeria’s refining capacity.
“This will really help not only Nigeria but sub-Saharan Africa. There has not been a new refinery for a long time in sub-Saharan Africa,” Dangote said in a telephone interview.
The country currently has the capacity to produce some 445,000 barrels per day among four refineries, but they operate well below that owing to decades of mismanagement and corruption in Africa’s leading energy producer.
Nigeria, the continent’s second-biggest economy, relies on subsidized imports for 80 percent of its fuel needs. A surge in domestic capacity would be welcomed by investors in Nigeria, but it would cut into profits made by European refiners and oil traders who would lose part of that lucrative market.
Dangote said the country’s ability to import fuel would soon be challenged. “In five years, when our population is over 200 million, we won’t have the infrastructure to receive the amount of fuel we use. It has to be done,” he said.
Past efforts to build refineries have often been delayed or canceled, but analysts have said Dangote should be able to build a profitable Nigerian refinery, owing to his past successes in industry and his strong government connections.
The Dangote Group’s cement manufacturing, basic food processing and other industries have helped lift his personal fortune to $16.1 billion from $2.1 billion in 2010, according to the latest Forbes estimate.
Nigeria has two refineries in its main Port Harcourt oil hub, one in the Niger Delta town of Warri, and one in Kaduna in the north that serve 170 million people. Not one of them functions at full capacity.
Analysts have said previous attempts to get refineries going have been held back by vested interests such as fuel importers profiting from the status quo. Dangote said this concerned him.
“The people who were supposed to invest in refineries, who understand the market, are benefiting from there being no refineries because of the fuel import business,” he said. “Some … are going to try to … interfere.”
Nigeria’s government subsidizes fuel imports to keep pump prices well below the market rate at a cost of billions of dollars a year. Fuel subsidies are the single biggest item on the country’s budget.Advertisement

Dangote said making a new refinery run at a profit would work even if the government failed to scrap the subsidized fuel price that has deterred others from investing.
“We’ve done our numbers and the numbers are okay.”