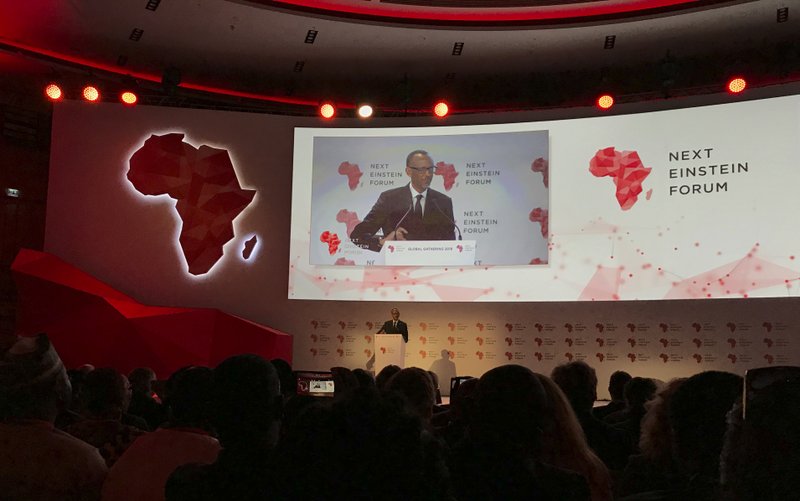 KIGALI: South African geneticist Vinet Coetzee held up a malaria-diagnosing scanner that she said can be developed for use in Africa’s rural areas without the need for blood samples or lab tests.

“This can be rapid, affordable and non-invasive,” she said. “It can reduce health inequality and bring us one step closer to a world free of malaria.”

The prototype was among the research projects highlighted at the Next Einstein Forum conference last month in Rwanda to encourage the development of young scientists across Africa. Organizers called it the largest-ever gathering of scientists on the continent.

“We can go from a dark continent to a bright continent,” said Nigerian chemistry professor Peter Ngene, who described how he plans to use nanotechnology to store solar energy efficiently in hydrogen batteries.

Rwandan President Paul Kagame, the current chair of the African Union, opened the gathering by linking scientific progress to Africa’s development at large.

“Knowledge economies are prosperous economies,” he said. “Today, more than ever before, adequate math and science proficiency is a prerequisite for a nation to attain high-income status and the gains in health and well-being that go along with it.”

The president added: “For too long, Africa has allowed itself to be left behind.” As the continent catches up it cannot afford to leave out women and girls, Kagame said, urging Africans not to accept the global gender gap in science as inevitable.

“The movie ‘Black Panther’ gives positive role models of African women in science,” said Eliane Ubalijoro, a professor at McGill University in Montreal, who pointed out the large number of women at the conference. “We are creating Wakanda right here!”

Africa lags behind the rest of the world in scientific output, but research on the continent is growing rapidly and a few countries like Ethiopia, Kenya and Mali have increased their research and development spending efforts “to the level of a middle-income economy,” according to the UNESCO Science Report .

The Next Einstein Forum began in 2013 to help the continent move forward and now sponsors 19 African science fellows, along with an Africa Science Week at schools in 30 countries. At the conference the forum launched Scientific African, a quarterly, peer-reviewed journal to publicize new research.

The forum is an offshoot of the African Institute for Mathematical Sciences, which provides full scholarships for students to earn masters’ degrees in mathematics at centers in Cameroon, Ghana, Rwanda, Senegal, South Africa and Tanzania. More than 1,500 students from 43 African countries have graduated from the program since 2003, with 32 percent of them women.

The program to encourage Africans to study mathematics is the brainchild of South African-born physicist Neil Turok, who grew up as his parents fought apartheid, the country’s former system of racial oppression.

“My parents took pride in combatting injustice and they were thrown in jail. It was difficult for me personally but it was good for my studies because I threw myself into my work,” he told the conference.

Turok attained international success in physics and mathematics, collaborating with Stephen Hawking, teaching at Princeton and becoming the director of the Perimeter Institute, an independent research center for theoretical physics in Canada.

Challenged by his father to do something for Africa, Turok founded the mathematical institute in 2003. A decade later, the Next Einstein Forum was launched.

“We can draw strength from hardship,” said Turok, who said he believes the world’s next Einstein can be an African. “When Africans enter science in large numbers, with their diversity, backgrounds and motivation, they will make massive, transformative discoveries. Those discoveries are just waiting there to be made.”