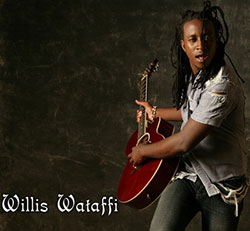 EIGHT years after the disbanding of arguably the most loved Zimbabwean band post-millennium, Afrika revenge, there had been talk that the duo of Willis Wataffi and Mehluli ‘Taz’ Moyo were finally getting back together after pictures of them at a studio were leaked to the world.
But the most known half of the duo, Willis Wataffi has called that speculation a ‘daydream’, saying he was definitely continuing with his streak as a solo act.
Radio personality Comfort Mbofana had even announced that a reunion was imminent live on radio after seeing pictures taken at the Media For Development Trust’s studios, a position Willis has since tried to correct.
“I am simply recording tracks to mark my ten years in the music industry and choosing people to collaborate with in that effort,” he said.
“I have a number of artistes I have approached with whom I am working and despite the acrimonious disbanding of Afrika Revenge, I felt it would be stupid not to collaborate with Taz on one of the tracks since we worked together in the past and should not let our differences divide us for life.”
Reports indicate that Willis was so irked by the statement by Comfort that he made a phone call to the station’s boss Admire Taderera who is reportedly on leave, to register his displeasure with the announcement.
He refused to confirm or deny making that call but chose to explain why he took exception at the radio announcement.
“I am recording an album in my name,” he said.
“The thing is if people hear that Afrika Revenge is coming back together again, they may ignore my album and decide to wait for the ‘reunion album’ which is a figment of people’s imaginations.
“These random statements have a direct impact on my sales and my career.”
Insiders say Comfort may have gotten the idea from his wife Prudence Katomeni Mbofana, who was present at the recording of the Willis and Taz duet and could have automatically concluded that the team was back together.
“We cannot get back together again because Taz has been sitting for the past eight years while I have been active in my music career and haven’t been stagnant,” said Willis.
“We are worlds apart now with regards consistency and can never be equal partners in a new Afrika Revenge. If we failed to stay united last time what can keep us glued this time around?”Advertisement

Meanwhile, Willis is due to return to his new base in the United Arab Emirates where he has made inroads and intends to carve a name for himself.
While he has been cruising in keeping his career going, Taz to his credit has released a comeback soulful and prayerful scorcher Idolo Pansi which is a well-received track of unmatched pedigree.
It remains to be seen if he will continue to carve his comeback trail.