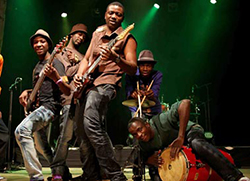 HAILING from Zimbabwe, afro-fusion up-and-comers Mokoomba are ready to take the United States by storm. Heading back to the US for only the second time, Mokoomba made a tour stop at the Music Hall Loft on Thursday. Their blend of music is energizing, it’s funky, and it’s very fresh. If you’re looking to stir the pot a little bit and subject yourself to something that your dancing feet will thank you for later, this is the ticket.
EDGE caught up with Abundance Mutori of the band to learn a bit more about what they’re up to, where they’re coming from, and what you can expect out of them.
EDGE: Music. Why do you seek it? Why do you create it?
Mutori: Music, in our culture, is something that is a part of daily life as well as community and spirituality. So, since childhood, you don’t have to seek music. It is a part of the fabric of life. Making music comes from recognition that you have a special skill and are wanting to use it. The earliest training for Mathias, our lead singer for example, came from his traditional initiation period at the age of 12 when he spent six months living in the bush and being taught a lot of traditional ceremonies – songs as well as survival skills. This became the foundation and inspiration for a lot of Mokoomba music once we developed our skills as musicians and began working on our own material as a band.
EDGE: Let’s talk a bit more about the music Mutori is making. You celebrate afro-beat, you celebrate fusion. You celebrate hip-hop. You celebrate so many different types of music. How important is variety to the band?
Mutori: The variety of influences you hear in our music is a reflection of our interests as musicians but also as people, who grew up on the crossroads of many cultures that we have in Victoria Falls. We come from a place where speaking five languages is normal. While, musically, our foundational culture is Tonga, within the band we have a mix of cultures from Zambia to Angola, as well as various cultures in Zimbabwe, so it is natural for us to pick and choose from a variety of influences in the way we make music and this extends further afield. This is also a response to being a young band and travelling a lot and listening to a wide variety of musical styles. No tradition stands still, what we are doing is a response to being a Zimbabwean in the 21st century. Advertisement

EDGE: How would you describe your music to someone who hasn’t heard it before?
Mutori: The music we make is living energy. That is the best description; vocals, the rhythms, the dancing are designed to communicate with audiences the celebration of life in every way life comes. It is a mesh of African rhythms brought together with songs and picks up on styles you will recognize from reggae to funk, afrobeat and soukus, whoever you are and wherever you are, you will dance.
EDGE: How did this band come together? Why did it come together? What do you enjoy about being a part of this band?
Mutori: We grew up in the same neighbourhood in Victoria Falls and studied in the same schools and met while learning and playing around. In fact, when we started playing together, Mathias was doing percussion, Miti was playing the keys. It was more about wanting to play and figuring things out as we go along. As our individual skills developed, so did our musical ideas. We first realized we had a future together when we won the Music Crossroads international competition, which enabled us to travel to Europe for a tour in 2008 and to make a first recording. Mutori is different from a lot of other bands in Zimbabwe. We do not have a leader. Everyone has a unique and important role in the band, not just in the performance and the way we operate, but also in composing songs. We’ve been together for almost ten years now and it is a long journey, so we have shared a lot of experiences and have grown up together. We are family.
EDGE: Where do you draw inspiration from when you write your music?
Mutori: When we write songs, it is a collaborative process. Mathias usually brings the key idea for the new song and for him traditional rhythms and spirituality are a constant source of inspiration and that is at the heart of each song. Then we start singing and improvising on that idea until it comes together. Individually, we are always playing around with ideas on our respective instruments when we practice at home, so in the studio, all that gets thrown into the mix. Sometimes we start performing a song, which is still a work in progress to get feedback from the audience and to see how it feels to play the song on stage.
EDGE: You’re heading back to the United States for a quick tour. What excites you about the trek? What can folks expect when they come to see you play at the Music Hall Loft here in Portsmouth, New Hampshire?
Mutori: We really enjoyed our first trip to the U.S. in 2014 and we also realized what a big territory it is and that it is very diverse. So this year we are engaging with different audiences and performing in very different spaces and that is very exciting for us. Also on this tour, we are presenting a lot of new material. We have gone back to our roots last year to develop a semi-acoustic project and we incorporate some of that into our show, so in addition to our high energy dance songs, there should be some instrumental interludes and serious drumming songs.
EDGE: You’ve travelled to countless countries to celebrate and perform your music. How does this movement – of traveling from place to place – bring you closer to the people of the world? How does this movement inform your music, if at all?
Mutori: One of the things that travelling has taught us is that we are all united in music. Travelling has brought us closer together as a band but also brought us in contact with a lot of fellow musicians. Performing at festivals, as we have done, is an amazing opportunity to see music from all over the world and that is a very special education, which builds on our stagecraft and musicianship.
EDGE: That said, what do you enjoy about being home in Zimbabwe when your tours comes to an end? How do you recharge after long periods of travel? (What do you like to do besides play music?)
Mutori: Being at home is about two things: relaxing and spending time with family. The pace of life in Zimbabwe is very different, the weather is always nice and it is a time to socialize and live simply, especially when we go back home to Victoria Falls. When we get back together in Harare, we start playing around with new ideas for new projects, rehearsing, recording. We always introduce new material first to our home base. These are the people who have been supporting us from the earliest days and their feedback on new material is really important to us.
EDGE: What are you hoping people take away from the experience of Mutori’s music?
Mutori: We always hope that our music brings people joy and energizes them in their own life. We also hope they will come away with a greater insight into the richness of African musical traditions and appreciation that if musical traditions can blend from all parts of the world to make something beautiful, so can all people when they come together.
EDGE: What do you get from this music that you play?
Mutori: Music is our life, it is something that we live and breathe, so it is a way of life and being alive for us. This is how we express ourselves and connect with people.