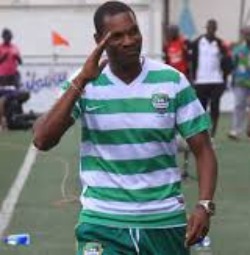 FC Platinum coach Norman Mapeza refuses to throw in the towel says his team can still progress to the next round of the CAF Champions League despite a humiliating defeat to Desportivo De Agosto of Angola.
The Zimbabwean champions were handed a three nil loss on Sunday and stare an early exit from the continental showpiece barring any miracle in the return leg at Mandava Stadium this weekend.
Like any optimist, Mapeza believes they are still in the competition and can overturn the seemingly insurmountable obstacle.
“You can never know with football, if you remember last season Paris Saint German beat Barcelona by five goals and they went to Nou Camp and were beaten by six goals,” said Mapeza.
“It can happen in football, it is all about belief.”
Mapeza conceded that his team made mistakes that eventually cost them the game.
“It is important to put maximum concentration during the first quarter of the game. We conceded within the first 15 minutes of the game and again in the second half it was the same thing.
“It happens in a game of football; we just have to go home and try to push. It will be a bit difficult but we have to rectify our mistakes and try to psyche up the guys,” he said.
This is the heaviest defeat the Zvishavane based side has suffered in this competition.
In their maiden appearance in 2012, they lost to Al-Merreikh of Sudan 5-2 on aggregate in the first round.Advertisement