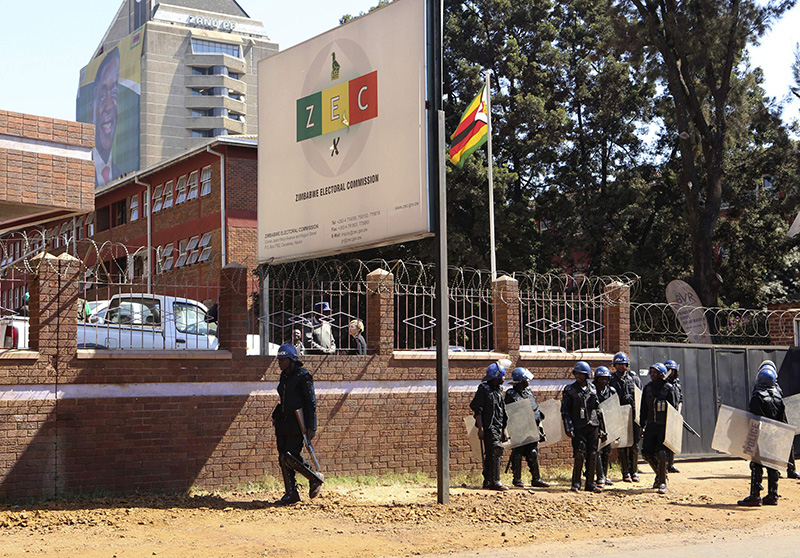 HARARE: As life slowly returns to normal in Zimbabwe‘s capital, Emmerson Mnangagwa, the winner of a hotly contested presidential election, prepares to take charge of a politically divided nation facing a prolonged and severe economic crisis.

Addressing these major problems is the most urgent task now facing his soon-to-be sworn-in administration.

A former vice president, 75-year-old Mnangagwafirst took office in November following a military intervention that put an end to the near four-decade rule of his mentor, Robert Mugabe.

On Thursday, Mnangagwa was declared the winner of the June 30 poll, narrowly securing an outright majority with 50.8 percent amid opposition cries of foul play.

Nelson Chamisa, leader of the opposition MDC Alliance who came in second with 44 percent, dismissed the results as a “coup against the will” of Zimbabweans. Claiming he was the winner, he said on Friday that he is prepared to take legal action.

Two days earlier, discontent following the announcement of the parliamentary election results, which saw Mnangagwa’s ZANU-PF winning a clear majority, had led opposition supporters to take to the streets of central Harare, claiming the vote was rigged.

At least six demonstrators were killed on Wednesday in clashes with security forces, while 21 opposition supporters were detained and are expected to appear in bail court on Monday.

The violence prompted most people in Harare to stay indoors before the release of the presidential election results.

Will to move on

Since being announced as the winner, Mnangagwa has denounced the opposition’s rigging allegations and appealed to Chamisa to accept the outcome.

But Piers Pigou, Southern Africa consultant for International Crisis Group, said that Mnangagwa needs to take greater action to resolve the dispute and get the security situation under control.

“As head of state, Mnangagwa needs to demonstrate there is a civilian element in charge of the country and he must show an openness to engaging in dialogue with the opposition,” he said.

“The behaviour of the security forces is not a good platform on which Zimbabwe can build on re-engagement and dialogue with the international community.”

Mnangagwa likely secured the top seat through the rural vote, with ZANU-PF making few inroads into urban constituencies that lean towards the MDC Alliance.

One of them was Hopley in Harare South, where Mnangagwa’s son Tongai, who is a novice in politics, won ZANU-PF’s only parliamentary seat in the capital.

Along a busy road in this poor neighbourhood, street vendor Wilfred Bumira said that despite the controversy, he has accepted Mnangagwa’s victory and urged opposition supporters to do the same for the sake of peace.

“The results are what they are, we have no choice but to accept them,” said the 34-year-old.

“People may be disappointed, but they have to accept Mnangagwa has won so we can move on and focus on our other problems,” he added.

As the first election since Mugabe’s military-assisted removal, the polls were seen by the international community as critical in legitimising Zimbabwe’s new leadership and a litmus test of the country’s reform efforts.

Western powers, including the European Union and the United States, said a credible election was one of the primary conditions for supporting a bailout or softer repayment plan for the debt-trapped nation. Zimbabwe owes more than $11bn to global institutions, including the International Monetary Fund and the World Bank.

In recent days, conciliatory messages calling for a peaceful resolution of differences have been pouring in from regional and international powers.

South African President Cyril Ramaphosacongratulated Mnangagwa, while Harriet Baldwin, Britain’s minister of state for Africa, urged aggrieved parties to settle their grievances through the courts where cases must be “handled swiftly and impartially”.

Heather Nauert, US Department of State spokesperson, said the election gives Zimbabwe an “historic opportunity” to start a new era, while encouraging “all political leaders to show magnanimity in victory and graciousness in defeat”.

Since taking office in November, Mnangagwa has pursued a “Zimbabwe is open for business” policy in a bid to engage international investors – but according to economist John Robertson, the prospect of an economic recovery is still distant.

“The very messy handling of the results is discouraging to people who may want to invest in Zimbabwe and those doing business here,” he said.

“Nothing can happen until there is certainty on the political situation, and it’s going to be a long time before people can make a decision. The outcome of the election dispute will determine what happens with the economy in future,” added Robertson.

While everyday survival seems to be the key concern of the average Zimbabwean, how the country deals with the post-election violence and the deep political rifts will also be critical to stability.

“Zimbabwe needs to go through a process of healing, and this involves dealing with the past in an honest manner,” said Reverend Useni Sibanda, executive director of the Zimbabwe Christian Alliance, which organised a pre-election peace march in the second city of Bulawayo.

“We must also deal with the current post-electoral issues so that everyone is satisfied with the results in order to ensure that we can move forward from a dispute to rebuilding the nation,” he said.

On the brink of a new chapter, Zimbabwe may struggle to find its feet as yet another election dispute unfolds. Until Mnangagwa and Chamisa resolve their differences, citizens’ hopes for an economic turnaround and democracy may have to wait a little longer.