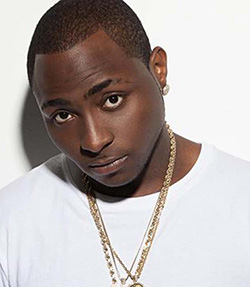 After success in Africa, the profiles of the Nigerian stars are soaring internationally

AS soon as he pads into the smart lobby of a Leeds hotel, 25-year-old Nigerian pop star Davido — wearing Gucci slippers and a merch shirt from his 30 Billion world tour — is accosted by excited staff requesting selfies. One woman tells him: “I listen to your music every day!”
Davido, aka David Adedeji Adeleke, is slightly jet-lagged, but amiable. He’s arrived in Leeds to perform at the 2017 Mobo Awards, where he’ll also receive the Best African Act trophy. This isn’t Davido’s first UK trip; he’s previously packed out club shows here. He has, however, reached a point where his success across Africa is translating into international recognition.
Having signed a major label deal with Sony, his triumphant latest single “Fia” follows “If” and “Fall” (the latter tracks so far amassing 54.7m and 38m views respectively on YouTube). Last month, he won Best African Act at the MTV EMAs, and in early 2018 his 30 Billion tour (which has already covered venues across the US, Spain, Djibouti, Ivory Coast and beyond) hits the UK.
“Funnily enough, this is the first time that I’ve won European awards,” says Davido, in sweetly raspy tones. “I realised that when I really focused on Africa and my culture, that’s when people started recognising me. I travel a lot, but I know the kind of environment I need to be in; I’d rather create the music at home, in Lagos. The travelling distracts me, because there’s so much going on.”
In the western music mainstream, the profile of young African talent is soaring. Of course, Africa’s vital influence on, and cross-pollination with, international music scenes, has been deep-rooted over decades; among countless examples are Fela Kuti’s Afrobeat movement and legendary 1970s Lagos hotspot The Shrine, which drew the likes of Paul McCartney to work in Nigeria.
The 21st century has seen collaborative projects such as Africa Express: launched by British musician Damon Albarn; it has connected artists from Mali, Congo, Senegal, the UK and the US. But recent years have also seen the mainstream focus on “afrobeats”: seemingly a catch-all term, yet very distinct from Fela’s polemical grooves. Afrobeats sounds are fuelled by youth culture and catchy anthems, their vocals and rhythms laced with electronic effects.Advertisement