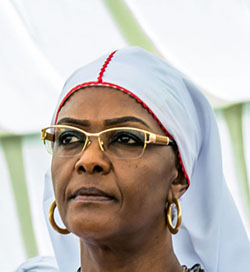 FIRST it was yoghurt. Then chocolates and ice-cream. Now Grace Mugabe has her very own branded water – and she’s handing it out for free.
Bottles of the drinking water bearing the 50-year-old first lady’s photo and the words ‘Mother of the Nation’ were handed out to rally-goers in the Harare township of Mbare on Thursday, where she was addressing supporters, photographs taken at the rally showed.
The Mugabes already run one of the largest dairies in the region, which belongs to the family firm, Gushungo Holdings.
Grace’s ‘Alpha Omega’ ice-cream, sour milk and milk products are available in almost all of Zimbabwe’s supermarkets, where they’re usually cheaper than rival brands.
The former typist denies she has plans to succeed her 91-year-old husband, who is looking increasingly unsteady at public gatherings.
On Thursday, she handed out maize and rice in Mbare, along with the water, it was reported.
Harare’s unsatisfactory drinking water supplies are a frequent bone of contention for residents: if locals are lucky enough to have water running from their taps, it’s often dirty and unappetising.
Watchdog @ZimMediaReview said Grace Mugabe had expressed her solidarity with those who had little food, tweeting: “Grace Mugabe says she sometimes skips meals to show solidarity with hungry Zimbabweans.”
Popular blogger @CynicHarare quipped: “Now, if only her husband can quit his job in sympathy with the jobless.” Mugabe has been in power since independence in 1980.Advertisement