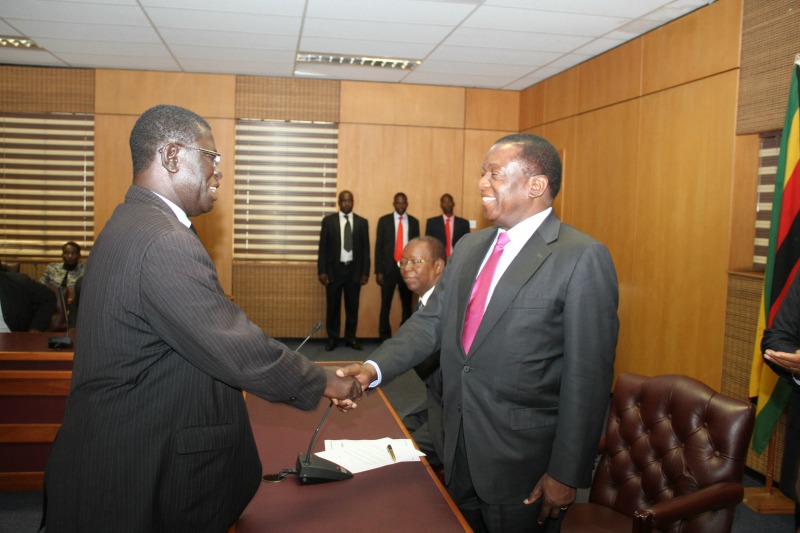 AG Machaya during swearing in by President Mnangagwa
Spread This News

Machaya said this through a written statement shared during the Kgalema Motlanthe chaired Commission of Inquiry into the disturbances that left six dead and injured many.

He had been invited to the hearing by the commission to interpret the Constitution and the Public Order and Security Act (POSA), as principal legal advisor to government.

“The Minister of Defence has to obtain the approval of the President for the deployment of the defence forces in matters of civil unrest.

At the time, Vice President Constantino Chiwenga was still in charge of the Defence Ministry.

The immediate former military boss has been singled out for blame by opponents who feel he could have used his residual influence within the army and his role as defence minister to unilaterally order the deployments.

Said Machaya, “A member of the public reading the Act (POSA) independent of the constitution will get the definite impression that the Minister of Defence is the person authorised to or with the power to deploy the defence forces for purposes of maintaining law and order within Zimbabwe.

“Definitely that impression will be created but as I said also the minister himself will be under no such misapprehension.”

Machaya tried to explain alleged inconsistencies between Section 213 of the Constitution of Zimbabwe that gives powers to the state president only, to deploy the military, and POSA that seems to imply that the Minister of Defence also has a similar right in Section 37.

He said POSA “should be read subject to the constitution”.

“If they are read in isolation, they give an impression that the minister is the one who is the ultimate authority in deployment of the military within the country,” he said.

This comes after High Court judge David Mangota was recently viewed as having implicated VP Chiwenga in the widely condemned shootings.

Mangota was said to have “nailed” the under fire VP, while dismissing a case in which one Allison Charles and Counselling Services Unit had dragged Mnangagwa to court seeking the disbandment of his inquiry team on the grounds that the appointing authority was conflicted in the matter.