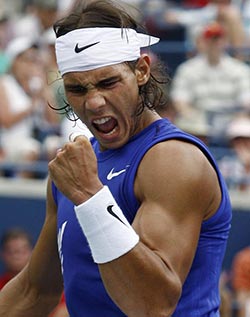 EIGHT-TIME grand slam champion Andre Agassi has picked Spaniard Rafa Nadal over Swiss maestro Roger Federer as the greatest tennis player ever.
The 32-year-old Federer, with 17 grand slam titles, leads his younger opponent who has 13 majors and is recognised as a complete player on all surfaces.
“I’d put Nadal No. 1, Federer No. 2,” Agassi told Singapore’s Straits Times newspaper, stoking the popular debate.
“Federer separated himself from the field for four years. He separated himself from (Andy) Roddick and (Lleyton) Hewitt.
“Nadal had to deal with Federer, (Novak) Djokovic, (Andy) Murray in the golden age of tennis. He has done what he has done and he’s not done yet.”
Nadal leads Federer 23-10 in all meetings and Agassi said the number of grand slam titles cannot be the sole yardstick to decide the greatest player.
“He has won multiple (majors), every single one (more than once) except the Australian Open – and give him another year on that,” Agassi said.
“It’s just remarkable to me what he has done, and he has done it all during Federer’s prime.”Advertisement