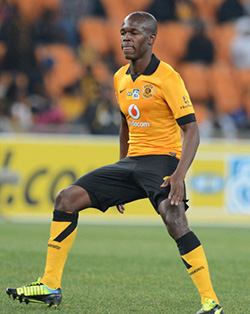 KNOWLEDGE Musona’s agent has denied reports that the Zimbabwean striker is on trial at Spanish La Liga club Granada FC.
It is widely known that Kaizer Chiefs football manager Bobby Motaung has been in dialogue with the player’s German Bundesliga club TSG Hoffenheim in a bid to bring Musona back to Naturena.
But it looks Chiefs will have to wait a little longer to resolve negotiations as Musona is reportedly having a trial with Granada, according to Spanish publication Ideal.
Reports claim that Musona is training with the Granada B team and will join the first team when they get back from a trip to Huelva, after which coach Joaquín Caparrós will have a few days to decide.
Mike Makaab, however, insists to KickOff.com that those reports are false.
“No it’s absolutely not true. Knowledge is in the final stages of rehabilitation following his injury and is still at Hoffenheim.”

The 24-year-old Zimbabwe international scored 16 goals in 24 starts for Chiefs last season before injury cut his campaign short.
Meanwhile, Dynamos defender Partson Jaure, who signed for University of Pretoria, is still to join his new team mates for pre-season training as he is awaiting his work permit.
The Zimbabwe international defender is in Harare still sorting out his work permit papers and according to reports from South Africa, Tuks coach Clive Barker is expecting him next week.
“Jaure is still in Zimbabwe where he is working on his paperwork before he joins us. We are hopeful of having him here next week. He will add value to our central defence,” says Barker.
The 24-year-old Jaure, is expected to fill the void left by Buhle Mkhwanazi, who has departed for Bidvest Wits.