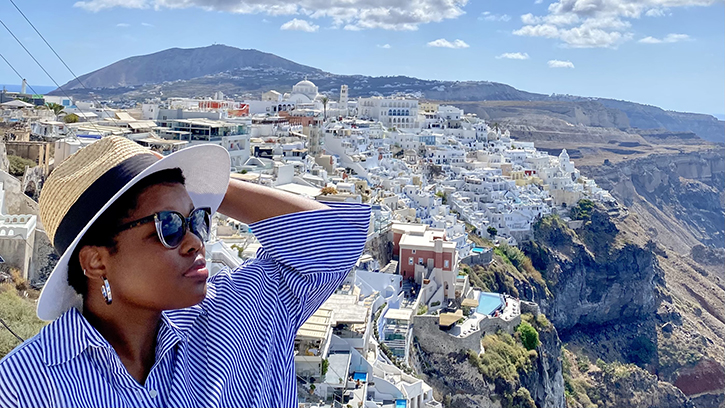 Agnès “Anjes” Mwanza was born and raised in Zimbabwe, but for the last 10 years, she has lived in Athens, the capital city and heart of Greece. The 37-year-old works as an account manager in the medical field and moved to Greece to join her family members who were living there.

“My family has been in Greece for over 30 years and so I have always visited since I was young,” says Anjes. “However, the first time I moved to live here permanently was around 14 years ago, though I returned home for about a year sometime in 2011.”

Despite having had family there who she visited whenever she had the opportunity, adapting to a whole new way of living life was not easy for Anjes and she struggled to adapt. Upon her arrival, she found that the Greece she had visited before and the Greece she now had to suddenly adapt to were different worlds altogether.

“I had to make new friends from scratch (something that I don’t particularly find easy) and I had to find a new church to call home. Even the work environment was not anywhere close to what I was accustomed to back in Zimbabwe. Because of all these changes, I suffered depression and I had a hard time talking about it or seeking help because it seemed like a wonderful opportunity and so my struggle would seem illogical.” 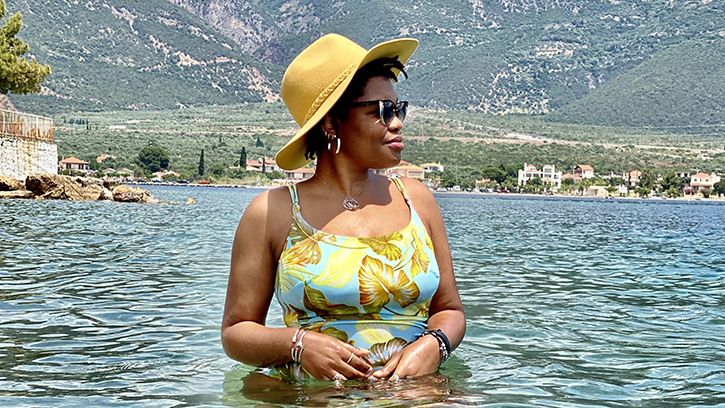 Fast forward more than a decade later and Anjes is well acclimated and thriving in Greece. In addition to having made friends who made her feel welcomed, there are many other things she enjoys about living in the country.

“I love the food. I love the deep blue sea. I cannot tell you how breathtaking the seas here are–one has got to see and experience it for themselves. And I love exploring the Greek islands. The country itself is such a picturesque place, and I consider myself truly blessed to live here and to be able to experience all its beauty. I also love the people here. I can now comfortably call Greece home because that’s how those that are around me have made me feel.”

Though different in many ways, Greek culture and Zimbabwean culture are also alike in some ways. One of the similarities is how in both cultures, food always brings people together. Anjes also appreciates the great importance both cultures place on family.

“Of course there are exceptions, but I am inspired by the strong and positive family relationships that I am surrounded by both back in Zimbabwe and here in Greece. I particularly love how both cultures are always ready to share, even with strangers. I love food and so Greece is heaven for me.”

However, as one can expect in a predominantly white nation, Anjes sometimes finds herself dealing with racism and discrimination. Though she says some of the incidents she has experienced were rather intentional, some of them were clearly due to ignorance and a lack of exposure to other races and cultures.

“Some encounters I have had were at work and a few random while I was either commuting or looking for an apartment. However, I realize that I am privileged to have worked and to still be working in a multicultural environment, and that has helped me understand that some people just lack exposure.”

With the increasing numbers of Black residents in Greece, those who lack exposure will have more of an opportunity to get to know and learn about different cultures. Anjes notices a lot more people of African descent living there now than there were back when she first came to Greece.

“There is a big community of West Africans: Nigerians, Ghanaians, and Cameroonians. There are also East Africans, particularly Ethiopians, Somalis, and then Kenyans. There are very few Zimbabweans, and I think though I might not have met everyone, the community is so small we almost all know each other or know about each other.”

In terms of affordability, Anjes finds Greece to be a fairly inexpensive place; even more so when compared to other places she has visited, both in Europe and abroad.

“Compared to Zimbabwe and a lot of other countries that I have traveled to, Greece is very affordable. I always have a deeper appreciation for Greece, especially after a trip abroad or even just here in Europe. In terms of infrastructure and amenities, Greece has a mixture of both ancient and modern.”

For travelers visiting Athens, Anjes recommends visiting the Acropolis to experience ancient Greek architecture, culture, and history. Set on the top of a hill, it is the perfect vantage point from which to take in sweeping views of all of Athens.

“Lycabettus is another high place worth visiting. It’s actually considered to be the highest point in Athens, and sunsets from there are worth climbing up the hill in any season–breathtaking. Cape Sounion is another place to see in Athens.”

She also recommends checking out one of the hundreds of gorgeous islands the country offers and not limiting yourself to just the popular ones like Mykonos or Santorini.

“One could even go island hopping and see up to three islands in one day for less than a hundred euros. I would recommend Hydra, Agistri, and Poros. Salamina is another island I love to visit almost every summer. It’s 15 mins away from the mainland and it only costs one euro each way. Because it’s not as famous as other big islands, it’s never crowded, which is always a bonus, especially in the Greek summer heat.”

Anjes’ upcoming travels include exploring more of Greece and some of the many islands she has yet to see. She hopes to check out a few of them this summer.

“But also, I’m longing for a holiday outside of Greece. I’m trying to go to places that I haven’t visited already but my heart is set between Paris, Amsterdam, and Dubai, which I have already been to a couple of times each. I’m yet to decide.”

Check out Anjes’ YouTube channel, Dear Anjes, to learn more about her life and travels in Greece.