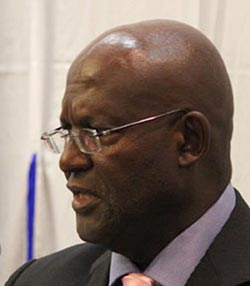 THE government-owned Agricultural Development Bank of Zimbabwe (Agribank) has recorded a $9,2 million loss for the year ended December 31,  2013 compared to $5,6 million due to increased non-performing loans.
Chief executive Sam Malaba told journalists on Friday that the bank hopes to rebound on privatisation but is still waiting for government to identify a suitable partner.
“Privatisation is part of the measures for the capitalisation of the bank,” Malaba said.
“To date the financial and legal advisors have completed the due diligence and are now finalising the valuation of the bank, subsequent to which the bank will go for selective tender.”
Agribank has so far received $4 million from Treasury, but requires at least $50 million to recapitalise.
Malaba said of that $9,2 million loss, $5,8 million was from impairment expenses, up from $3,8 million in 2012.
“If we hadn’t had impairment expenses our loss would have come down,” he said.
At $12,5 million, the bank remains severely undercapitalised against a minimum regulatory requirement of $25 million, a major constraint on its operations, Malaba said.
“Inadequate capitalisation of the bank results in funding and liquidity challenges and the inability to underwrite business growth. It also means having to make recourse to expensive market fixed deposits and the inability to attract significant deposits,” he said.
He said the impairment provisions was also a reflection of what was happening within the economy, with company closures increasing.
“It is basically made up of three large corporate entities who are holding 62 percent of the impairment total,” Malaba said.
“Going forward we have now adopted a very aggressive debt management recovery strategy to reduce our non-performing loans, whereby we are now expanding and intensifying our pre-loan assessments, strengthening credit granting processes and we now want to ensure that we perfect the security provisions before loan granting.”
He said the bank would also focus on post disbursement monitoring to see how money was utilised and to ensure stop-orders are in place for repayments. The bank would also proactively manage the repayment plans.
Net interest income stood at $6,9 million up from $5,3 million in 2012. Total operating income fell slightly to 19,1 million in 2013 from $19.9 million in 2012.Advertisement

Operating expenses increased by 1.8 percent to $22.7 million after bank implemented stringent cost containment measures.
The bank is setting up a micro finance division to support small and medium enterprises, particularly those in the agriculture, mining and retail distribution. The division will be operational in May this year, Malaba said.