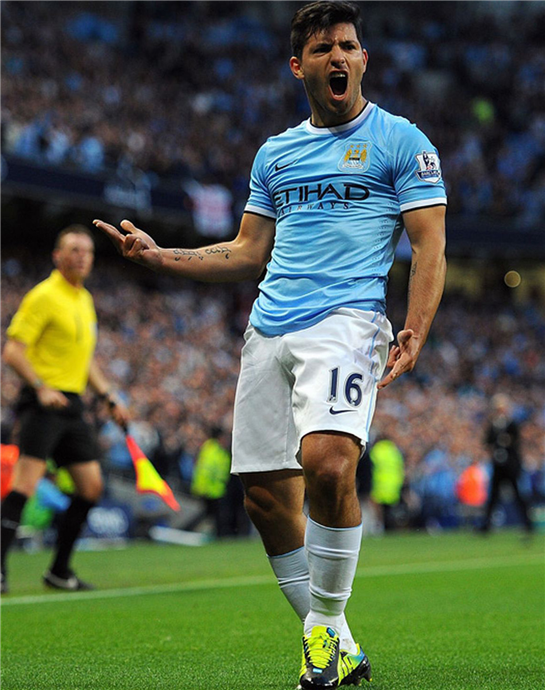 SERGIO Aguero is one of the top five players in the world and the Manchester City striker has the potential to be better than Cristiano Ronaldo and Lionel Messi, manager Manuel Pellegrini said on Friday.
Aguero, who has scored 17 goals in all competitions, netted a hat-trick against Bayern Munich in the Champions League on Tuesday to give City a 3-2 victory and keep alive their hopes of reaching the last 16.
The 26-year-old has been an influential figure for a City side that has looked flat at times this season and Pellegrini believes the Argentine striker can be better than Real Madrid’s Ronaldo and Barcelona’s Messi.
“Sergio is a top player,” Pellegrini told a news conference. “He’s a very important striker in the Premier League and we’re very glad to have him.
“I am always asking and demanding that he tries to be the best player because he has all the conditions to do that.
“I am sure he is in the top five (players in the world). I don’t think he is better than Cristiano (Ronaldo) or (Lionel) Messi, but he must be very near because he has all the conditions to do it.
“When he plays, it makes a difference.”
Third-placed City travel to St Mary’s to take on high-flying Southampton in the Premier League on Sunday, having not won an away fixture against the Saints since 2003.
Despite predictions that new Southampton manager Ronald Koeman would struggle after the departure of key players during the close season, Pellegrini has been impressed by the way the Dutchman has gone about his business on the south coast.
“They are a good team with very good players and they’re playing very well,” he said. “It’s no surprise they are where they are.
“Ronald Koeman has lost four or five players but they are still a good team and that’s a merit to him. It will be a tough game.”
Champions City will be without striker Edin Dzeko, midfielder David Silva as Aleksandar Kolarov for the trip to Southampton as the trio are still recovering from injuries.
“I suppose Edin Dzeko will be fit next week,” Pellegrini said. “There are no complications with David Silva, it was a ligament injury and he is recovering.”Advertisement