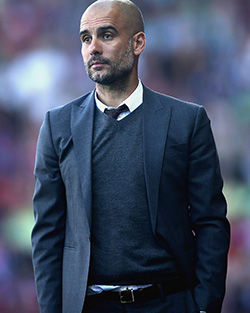 MANCHESTER City manager Pep Guardiola said on Wednesday he had no plans to sell Sergio Aguero but confirmed the club was in talks with “three or four” potential new signings.
Speaking to reporters ahead of Manchester City’s Houston derby with Manchester United on Thursday, Guardiola attempted to draw a line under speculation about Argentina striker Aguero’s future.
“He’s our player. He will remain here,” Guardiola said of Aguero.
The City boss, meanwhile, was coy about a possible move for Arsenal’s Chilean international Alexis Sanchez.
Sanchez is reportedly keen to leave the Emirates although manager Arsene Wenger has indicated the player is not for sale.
“Alexis is a player from Arsenal. Arsene said that, it’s because he knows more than me,” Guardiola said.
Guardiola appeared to confirm City’s interest in Real Madrid defender Danilo and Monaco’s Benjamin Mendy but again declined to go into details.
“We are talking to three or four players – with the next three, four, five years in mind. They are young players,” Guardiola said.
“We have options for players coming, but until the deal is done, out of respect for the other clubs I cannot say anything.
“Mendy is the same case as Danilo. We have targets and we see what happens. He’s a Monaco player so I’m quiet in my comments.”
City, meanwhile, are planning to offload striker Kelechi Iheanacho, who is on the brink of a deal to join former champions Leicester City.
Guardiola said the 20-year-old Nigerian needed regular football.
“Kelechi’s a young player. It’s not easy for him,” Guardiola said.
“He needs to play at that age and that’s why he and the club decided it was best for him to leave.”
The City manager, however, admitted that the uncertainty surrounding the transfer market was distracting from his team’s pre-season and suggested the European transfer market should be shortened so it closed before the start of the new season. The window remains open until August 31.
“Unfortunately the market finishes the 31st. I think that’s a huge mistake from Uefa,” Guardiola said.
“I think the market should finish when we start the season. It’s too long, too large.
“We are playing here with guys who maybe will not continue, or with players who are coming but are not here. We are playing in a situation where we don’t know exactly what is going to happen for the rest of the season, so we miss time.”Advertisement

City open their pre-season US tour against United at Houston’s NRG Stadium on Thursday. They then face Real Madrid at the Los Angeles Coliseum on July 26 before taking on Tottenham in Nashville on July 29.