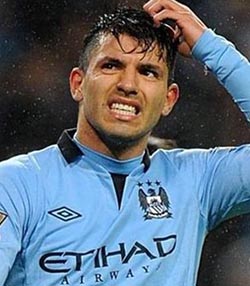 SERGIO Aguero has not fully recovered from a hamstring injury and will miss Manchester City’s Champions League round of 16 first-leg match against Barcelona on Tuesday, coach Manuel Pellegrini said on Monday.
The 25-year-old Argentina forward, who has scored six times in five Champions League matches this season, pulled his hamstring after scoring in City’s 5-1 win at Tottenham Hotspur on Jan. 29 and has missed the last three matches.
“Aguero did not train today and is not on the squad list for tomorrow, he will not be fit,” Pellegrini said in his pre-match press conference at the Etihad Stadium.
“We will see if he can be fit for Saturday but that is also difficult.”
There was good news for City, however, as Brazilian midfielder Fernandinho has recovered from a thigh injury and will be in the squad against Barcelona after also missing the last three games.
“(Fernandinho) has a chance. He is in the squad list for tomorrow (Tuesday).
“We will see tomorrow who can start but he has worked without any problem.”Advertisement