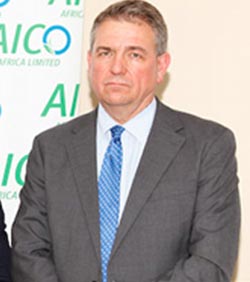 LISTED agro-industrial conglomerate AICO Africa Limited’s rights issue in which the firm sought to raise US$40 million was subscribed by 94,5 percent.
In a statement to shareholders on Tuesday, Aico said the remaining 5,43 percent of the will be issued to the underwriter. The rights issue shares will be issued and listed on the Zimbabwe Stock Exchange on February 10 this year.
Aico Africa Limited is looking for foreign investors for wholly-owned subsidiary, Cottco, as well as for FMCG unit, Olivine Industries in which it has a 49 percent shareholding.
AICO is also set to complete the disposal of a 20 percent shareholding in Seed Co to a United Kingdom seed company, Limagrain, by the end of November.
The exercise is part of the group’s unbundling exercise that seeks to raise fresh capital injection to boost operations.
Group chief executive officer, Pat Davenish, said: “The transaction (for Seedco) should be completed by the end of November. Seed Co’s market share has gone down. But after all transactions are complete, our outlook is bright.
He said the global seed house would bring capital, expertise and technology which would enable the expansion of operations particularly in West Africa.
Davenish said operations at Olivine Industries were still depressed and in need of working capital.
AICO owns 50 percent shareholding in Seed Co, 100 percent in the Cotton Company of Zimbabwe (Cottco) and 49 percent in Olivine Industries.
He said the group might have a rights issue or a private placement thereafter.
Cottco is expected to significantly underperform this year due to the size of the cotton crop which fell to 145,000 tonnes, from an initial projection of 250,000 tonnes.
The decision to unbundle AICO was reached after market intelligence revealed that a proposed rights offer would not be supported by shareholders.
AICO had targeted to raise US$40 million through a rights issue to recapitalise Olivine Industries, a company it acquired in 2007 from Heinz Corporation, and some of its subsidiaries to improve capacity utilisation as well as to retire expensive debt.Advertisement