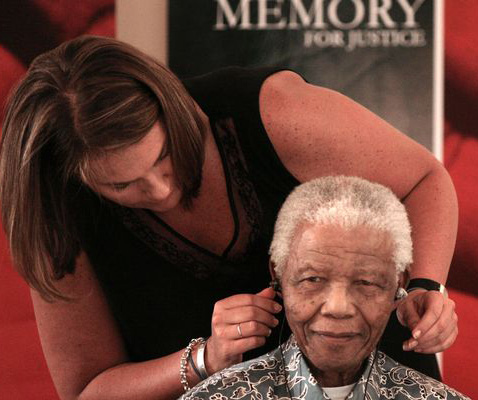 NELSON Mandela’s widow was forced to get accreditation to attend his memorial service and could only bring four family members as his clan squabbled after his death, the South African icon’s former private assistant says.
Graca Machel, who became Mandela’s third wife in his twilight years, was frequently undermined by some members of his family, former Mandela assistant Zelda la Grange wrote in her memoirs published on Thursday.
“It was becoming farcical. If we could barely get Nelson Mandela’s widow and her children accredited to attend his memorial service, it was becoming downright impossible to get anyone else officially accredited,” la Grange wrote in the book “Good Morning, Mr. Mandela”.
State inefficiency also meant friends like Archbishop Desmond Tutu and Oprah Winfrey struggled to get passes to the funeral last December in rural South Africa, according to her account.
Mandela’s daughter Makaziwe has threatened to sue la Grange over the book’s allegations, according to local media.
“I have learned from Madiba that you will never, ever do anything that will please everyone. You have to be happy with yourself,” she told Reuters, referring to Mandela by his clan name, when asked about the threat of legal action.
“THE ROTTWEILER”

La Grange, nicknamed “the rottweiler” for being overly protective over Mandela, did not initially have a smooth relationship with her boss’ wife.
“She was the wife, I was just a secretary but I was giving them instructions on how to live their lives. It was difficult,” la Grange said during her book launch in Johannesburg, attended by some of Mandela’s family and friends.
While accompanying the president on a trip to France as a 24-year-old, la Grange was mortified to realise that Mandela was alone behind a locked door with a woman, a thing that was her duty to ensure never happened.
Pleas to other aides to help her save the situation fell on deaf ears. Mandela later introduced the stranger as Graca Machel from Mozambique.
The book traces the 43-year-old la Grange’s upbringing in an Afrikaans family that considered Mandela a terrorist. It goes on to describe her improbable appointment to his office when he became president in 1994, and her close relationship with him until his death last year.Advertisement

The life and beliefs of la Grange, a white South African who grew up supporting the apartheid system of racial segregation, were transformed after she started working for Mandela.
UNLIKELY AIDE

The book title is drawn from a conversation during her initial meeting with the country’s first black president, when she nearly bumped into him in a corridor.
“I was ready to pull back my hand after shaking his but he held on … I wasn’t sure if I was supposed to hold this black man’s hands,” she wrote.
La Grange started as a typist but went on to become Mandela’s trusted assistant until just before his death at the age of 95. She and other members of his staff were bequeathed 50,000 rand (2,729 pounds) each in a will read out in February.
La Grange plans to donate a portion of the book royalties to the Nelson Mandela Foundation to further his legacy.
“The story of a young white Afrikaner girl working for the president is a story that could only happen in this country. It is really a fairy tale,” Ahmed Dangor, former chief executive of the foundation, told Reuters at the book launch.
Often photographed with a white-haired Mandela leaning on her arm for support, la Grange accompanied him on trips abroad and was with him when he met world leaders and celebrities.
On a lighter note, she recounts how she and Mandela shared a lift with James Bond actor Pierce Brosnan in Ireland. After 27 years in prison, Mandela had no idea who Bond or Brosnan were, but pretended he did when they shook hands.
With Brad Pitt, Mandela asked for a business card, which the actor did not have. “So what do you do?” Mandela asked – to which the Hollywood star replied: “I try acting for a living.”