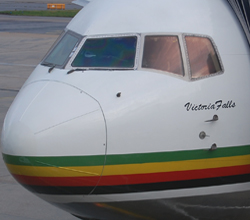 AIR Zimbabwe has claimed Tuesday that there were political efforts to undermine its turnaround strategy after vehicles, computers and other office equipment was seized over money owed to a former senior manager.
The property was seized after the airline’s former sales and marketing manager, Stephen Nhuta, won his claim for a US$142,000 retrenchment package following an arbitration hearing.
“Air Zimbabwe retrenched Dr Nhuta and did not pay him any cent. So we went to the High Court and he won the case. We then wrote to the sheriff last Friday to execute the order,” said Nhuta’s lawyer Caleb Mucheche.
But Air Zimbabwe spokesperson, Shingai Taruvinga, said the property had since been returned but argued that it should not have been seized in the first place.
“The debt is owed by Air Zimbabwe Holdings and the judgment debtor has full protection of the law,” she said adding the company was also appealing the arbitration award.
“It is common knowledge Air Zimbabwe has obligations but has not been able to settle and is protected under Section 8 and 9 of the Finance Act of 2012, which makes it impossible to attach or attempt to attach any property until protection period has ended in 2015.”
Mucheche however, said Air Zimbabwe’s claim for protection under the law had been dismissed by the courts.
“We have a 10-page judgment stating the dismissal of their application. The judgment states that the Finance Act does not protect Air Zimbabwe and their property can be attached,” said he said.
Arbitrators granted Nhuta, who had been retrenched without benefits, the $141,790 award in October, 2010. The award was later registered by Justice Andrew Mutema.
Still, Taruvinga claimed that the seizure of the property was part of a political bid to embarrass the airline and undermine on-going efforts to revive its operations.
“The airline is meant to serve and provide a public service and the beneficiaries are people of Zimbabwe, who benefit from competitive fares,” she said.
“The ability to travel should not be confined to one’s means, but it is a basic right available to everybody.”Advertisement