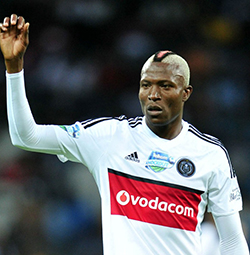 SOUTH Africa: Ajax Cape Town coach Muhsin Ertugral can’t stop smiling at being reunited with Tendai Ndoro, lavishing praise on the Zimbabwean following his debut display.
Receiving his work permit late on Friday, Ndoro was immediately named in the starting line-up, repaying his coach’s faith by netting late on to help his side to a much-needed 3-1 win over Platinum Stars last time out.
And Ertugral, who worked with Ndoro at both Mpumalanga Black Aces and Orlando Pirates, is delighted to have the striker back with him in Cape Town.
“Tendai is a special player,” Ertugral said. “Understanding those types of players is not easy as he is a star player. He is a unique player – in football you have individual players in a game.
“And I’m a coach that believes treating everyone the same is complete nonsense. You can’t treat Messi and Xavi the same – they are different personalities and different players.
“Goalkeepers and individuals, strikers are individuals – they need that special attention.
“I like the way Ndoro is, I like his character, that eagerness you need to have as a striker, but some coaches can’t handle that. I also had a great relationship with Collins Mbesuma over all those years, so those are special players.”
Following his exit from Pirates, Ndoro’s move to Saudi club Al-Faisaly didn’t quite work out as he netted just once in four games, yet Ertugral is pleased the 32-year-old hasn’t lost his touch.
“He came back from Saudi Arabia very fit, scored left right and centre here [in training] and immediately won the trust of the team,” the coach continued.
“I am thankful to the chairman and committee for getting me Ndoro, a player who I really wanted to have, as he will definitely add big volume to us here in terms of scoring goals.”
Ertugral also pointed out the striker’s strengths apart from finding the back of the net.
“He will do very well for us‚” Ertugral beamed. “He is always playing at an angle that means he will keep one of the centre-backs so occupied that he will open his backline.
“He also opens other lines and in that build-up process that we have‚ he never loses the ball when you give it to him at a certain angle, which helps us in the final third.Advertisement

“Going forward‚ we have seven or eight pass patterns which still need to be perfected‚ but Tendai is a player that understands exactly how to do that.”
Ertugral will hope the Zimbabwean will once again be on target as Ajax go in search of their first win over Cape Town City in four attempts as they prepare to take on their city rivals on Saturday afternoon.