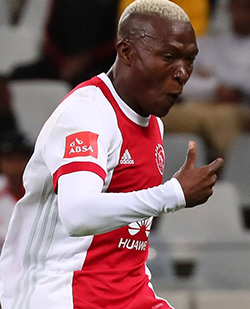 SOUTH Africa: Ajax Cape Town striker Tendai Ndoro will on Monday travel to Johannesburg to meet with the PSL amid controversy surrounding his registration with the Cape club.
The Zimbabwean was left out of the Ajax squad in his side’s 1-1 draw with Free State Stars on Friday night as his club attempt to clear the air regarding their new signing’s eligibility.
Questions have been raised following the forward’s move to the Urban Warriors – his third club this season after turning out for previous PSL club Orlando Pirates at the start of the current campaign before his unsuccessful stint at Saudi Arabian club Al Faisaly, where he scored one goal in four outings before returning to South Africa in December.
His subsequent registration for Ajax contravenes a FIFA law which states that a player can be registered with three different clubs in a season, but is able to play official matches for two of them.
Ndoro and an Ajax representative will on Monday fly to Johannesburg for an emergency PSL hearing to meet with the South African league’s governing body to discuss the matter and await any possible punishment, which could come in the form of a fine or docked points for the club.
“As a club we will not comment on the Ndoro situation,” Ajax club official Riyaad Khan told the media after Friday night’s encounter. “There is a hearing taking place on Monday, and we’ll make comments after that hearing takes place.”
Certain loopholes could save the struggling PSL side however, which they feel is the case based on another Fifa law, where “sporting integrity” is taken into account, as well as the fact that the player was not registered for three different clubs in the same league.
Since his move to Ajax, Ndoro has made two starts, scoring on debut in a 3-1 win over Platinum Stars before featuring in his side’s 1-0 derby loss to Cape Town City last weekend.
This article is taken from KickOff.com.Advertisement