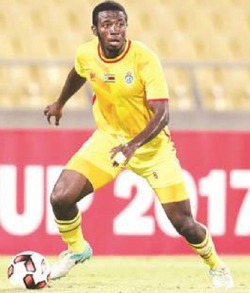 Ajax Cape Town coach Muhsin Ertugral has described new Zimbabwe international signing Gerald Takwara as a “young Tinashe Nengomasha” after he made his debut in a defeat to Mamelodi Sundowns on Tuesday.
The former FC Platinum midfielder, who signed for the club three weeks ago, put in some crunching tackles and Ertugral likened him to former Kaizer Chiefs hard man Nengomasha, whom he worked with at Amakhosi.
“Takwara showed what kind of player he can be,” Ertugral told reporters after the match. “But he is not fit enough and not powerful enough. I don’t mean in the physique, but rather the acceleration. His first three or four metres need to be quicker.
“When Tinashe [Nengomasha] first came [at Kaizer Chiefs] he was a lot like that.
“Some players you need to train in speed forms, so we need to work on that and I think it will kick in in two or three weeks and then we will have a different Takwara.”
Takwara, a powerfully built midfielder, was instrumental as FC Platinum won the championship last season, their first since their promotion into the topflight league.
Advertisement