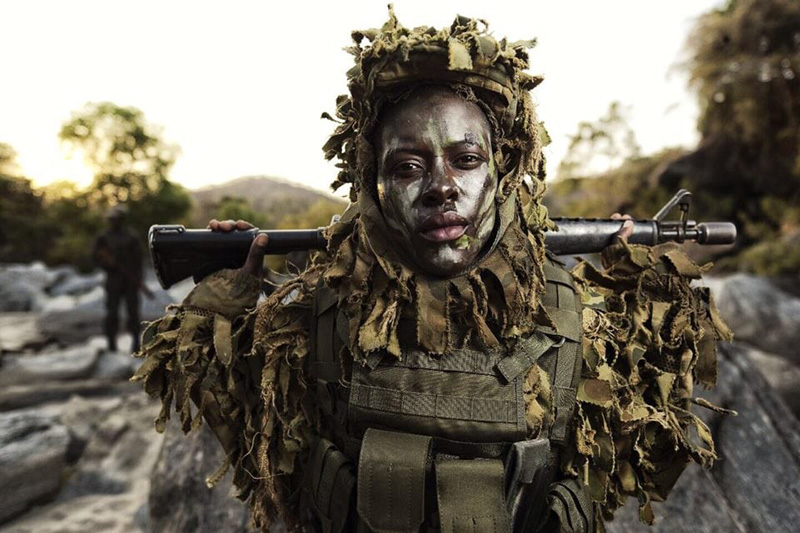 WHEN Australian former Special Forces sniper Damien Mander tried training a group of men to be anti-poaching rangers for the International Anti-Poaching Foundation (IAPF), only three of the original 189 made it after only a day.

So he tried training women using training techniques he learned in the Australian special forces. He didn’t go easy on them—in fact, he says the training he put them through was even harder than the men’s. He was looking for Zimbabwe’s “GI Janes.”

He soon learned that “they’re all GI Janes.” By the end of their training, only three women had dropped out.

These women are now known as the Akashinga, Shona for “The Brave Ones.” The 40-member, all-woman ranger team is now the face of Zimbabwe’s anti-poaching activism.

Mander is in Jackson (Wyoming, United States) this weekend fundraising for IAPF, the organisation he founded in 2009, and his female tour-de-force. He was at Rare Gallery on Saturday talking about his work and showing off a series of 10 “Endangered Species” paintings by David Riley that the gallery commissioned. A portion of revenue from each painting sold will go toward IAPF.

Tall, strong and decorated in tattoos, Mander looks far more like an Australian war veteran than vegan animal conservationist. But he is both. And, as it turns out, his service in Iraq bred a new passion in him.

“Iraq broke down a lot of barriers for me,” Mander told Buckrail.

In Iraq, he understood that his fights, while violent, were fair. “If you get in a fight, the other guy’s got a gun,” Mander said. “He’s gonna shoot back.”

Animals, on the other hand, are defenseless to hunters, legal or otherwise. “You just saw poachers sneaking up and blowing them away.”

Mander visited Africa for adventure. But he left with a purpose. He founded International Anti-Poaching Foundation in 2009, and the foundation is now registered in four countries. The Akashinga team is only a year old, but is one of the organisation’s more ground-breaking initiatives.

And while women’s empowerment is a fortunate byproduct of the program, Mander says it is not the purpose. “[IAPF] is not a female empowerment organisation,” he said. “It’s a conservation organisation.”

Employing women, so far, has just made the most “business sense.” The Akashinga are resilient. Unlike their male neighbours, colleagues, spouses, and relatives, they are (so far) incorruptible, which means they don’t shy away from arresting a friend or neighbour when they’ve broken the law.

Mander suspects that the Akashinga’s strength in spirit is, in part, out of necessity. Many of them are survivors of abuse, extreme poverty. “They’ve been through hell for so long,” Mander said. So Mander’s expectations, which are both physically and mentally demanding, cannot break them.

Women are also far more likely to invest the money they earn back into the community. In Zimbabwe, women spend three times more of their salary on household and community enhancement than men—which means that even the men benefit from their labor. It’s fortuitous timing, too.

Zimbabwe (and other African nations) was once largely dependent on trophy hunting for both revenue and wildlife protection. The theory was that trophy hunting outfitters would protect wildlife from poachers, because there was financial incentive to save an elephant, for example, for their client.

But trophy hunting is “dying a natural death,” Mander said. Cecil the Lion put a real dagger in the industry back in 2015. As hunting outfitters fall by the wayside, IAPF has stepped in to revive both wildlife conservation and local economies. According to Mander’s figures, the Akashinga contribute as much to their local economies in 34 days as trophy hunting does in a year.

Since its inception last August, the Akashinga team has made 62 arrests—they made six on Thursday. Perhaps they feel sort of a kindred connection the animals they protect. “The protective nature of women is an untapped resource in an industry that relies on protection, and nurturing,” Mander said.

But be it an inherent skill or just that they’re good at their jobs, women, so far, have been the perfect wildlife advocates.

“Women are completely in charge of management and protection. At the very least, conservation has twice as many people to choose from,” Mander said. “At best, I think it’ll change the face  of conservation forever.”