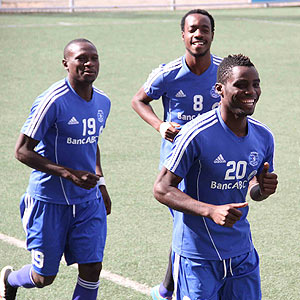 ZIMBABWE giants Dynamos and Highlanders are set for sponsorship boost as their principal sponsor Bancabc is set to renew their sponsorship packages for at least another year.
The two teams have been struggling in the transfer market and have both lost a number of key players, due to their inability to offer attractive offers to best players in the league.
Dynamos lost key players already in Dominic Mukandi, Godknows Murwira and Bret Amidu. The Glamour Boys had to conduct trials for free agents, as they move to bolster their squad ahead of the new season.
Dynamos last season finished fifth on the log while Highlanders finished third.
Bancabc have been the principal sponsors, to the two teams since 2011.The sponsorship package is however reduced, with Dynamos expected to receive about $250 000 and Highlanders receiving about $200 000.
Akbay back at Highlanders
Highlanders have finally settled down after their coach Elroy Akbay arrived in Zimbabwe back from the off season break.
The Dutch coach arrived on Friday and will join the team, as they leave for the preseason camp in South Africa.
The club secretary Emmett Ndlovu, confirmed that Akbay is back in the country.
“The coach has arrived after the break and we knew he will come. Now it’s back to our preparations for the new season. We are leaving for South Africa today and we needed everyone in the team, which is why it’s good that we have the coach and his assistants all with the team,” Ndlovu said.Advertisement