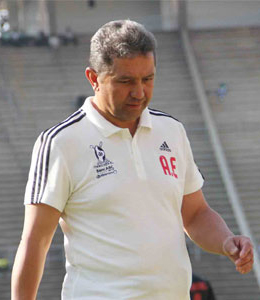 BULAWAYO side Highlanders won their second game of the season, after beating ZPC Kariba 3-2 and coach Erol Akbay has said that they do not mind to concede as long as they score more themselves.
He said that as much as they want to defend well, their main aim is to make sure that they attack well and score goals.
“It is very good to play well and not concede but, what will it help you if you defend and not concede but, at the same time you don’t score? We need to take risks and attack to create chances to score.
“We take chances; we play with risk and get three or four chances and they (ZPC Kariba) got three or four chances. If you don’t play with risk, then you cannot score, so what we have decided is that this season, we will be an attacking side.
“We will attack more, score goals and even if we concede we would have won games as if we score more than our opponents,” Akbay said.