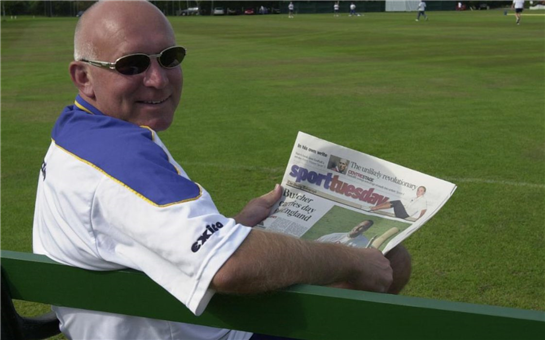 t probably happened all over the country last weekend. The match is due to start, but, before it can, one side have to ensure that they have 11 players. Someone has not arrived.
Frantic phone calls are made. Team-mates are quizzed about the missing man’s whereabouts, questions are asked about the night before.
But at international level? It cannot happen, can it? Well, let Alan Butcher take up the story.
“Concerns were raised when Shingi Masakadza, his usual lift to cricket, arrived at the ground late and without him,” he writes. “He had not turned up at the normal pick-up point and could not be contacted by phone. Shingi had waited, driven to the player’s home, waited some more but eventually had to leave for the ground. I phoned his mother, but she was in church with her phone off. It was now time for the team warm-up ”
The player in question was the young Zimbabwe leg-spinner Natsai M’shangwe and this was a match in a tri-nations T20 tournament between Zimbabwe, South Africa and Bangladesh in 2012.
M’shangwe had been told the night before that he was playing and had made arrangements to meet some colleagues the next day. To do so he had to catch a bus, for which the fare was one US dollar. But apparently he did not have the money, and he did not have a phone either because he had sold it to pay for previous bus fares.
As Butcher observes, it is indeed a “pathetic tale”, and not one that was easily believed by Zimbabwe’s cricket hierarchy because M’shangwe was dropped and not even permitted to attend training.
But it is also a tale that epitomises the problems Butcher faced in his three-year stint as coach of Zimbabwe, an adventure related entertainingly in his first book, The Good Murungu, with the title taken from a comment made by his housekeeper in Harare when presented with a new bed.
“Sah, you are a good murungu,” he said in thanks while using the Shona word that means Caucasian. “I must leave it to the reader to decide if the accolade was deserved,” says Butcher at the book’s beginning.
Well, this reader considers it deserved because Butcher is undoubtedly a good, thoughtful man.
There were, though, some in Zimbabwean cricket who considered his coaching methods too gentle, but, given the hand dealt him, with players so inexperienced in coming from a wholly unsuitable domestic structure, with selectorial interference and racist accusations, the arm-around-the-shoulder approach can hardly be without its merits.Advertisement

And Butcher’s cricketing knowledge and experience cannot have been questioned. He played one Test and had extensive coaching experience with Surrey and Essex.
He admits that he is probably better known these days as the father of Mark, the former England batsman, but Butcher senior was a fine, fine player in his own right. I know that from trying to break into the Glamorgan side when he and Hugh Morris were opening. Any cockiness at scoring a few runs at Cambridge suddenly disappeared.
This book is, though, not all about cricket and it is all the better for it. The blurb describes it as “part cricket memoir, part travelogue, part love song and part lament for a beautiful and troubled country”.
It is that indeed. Here is evidence that, despite all the troubles, Zimbabwe as a country and its cricket can still come together to create a tremendous tale.
This review is taken from The Telegraph (UK).