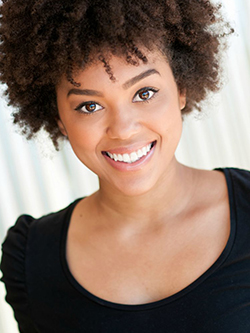 TEMPE-BORN and-raised actress Alexandra Ncube is about to have the best week of her life.
Knock on wood, of course.
Ncube — pronounced NOO-bay — is starring in the first national tour of “The Book of Mormon.” On Tuesday, Oct. 20, she’ll get a hometown heroine’s welcome as Broadway’s gleefully profane smash makes its long-awaited debut at ASU Gammage.
“I grew up seeing shows at Gammage Auditorium,” the 25-year-old Arizona State University alum says. “That’s kind of why I developed my aspiration to be involved in (theatre). …
“I’m just so proud to be able to go home and show the people who have helped me develop as a musician and a person where they’ve helped me arrive.”
Oh, and not long after the show begins its three-week run, Ncube has a date to get married to Valley musician and actor Sean Mullaney.
“It’s going to be a huge month,” she says.
Speaking of huge, “The Book of Mormon” is the most hotly anticipated Broadway show to visit Tempe in years.
The edgier-than-thou musical comedy is the brainchild of Trey Parker and Matt Stone, the creators of TV’s “South Park,” along with Robert Lopez, who co-wrote the songs for Broadway’s “Avenue Q” and Disney’s “Frozen.”
It tells the story of two 19-year-old Mormon missionaries — one a preening goody-goody, the other a “Star Wars”-loving nerd — who are sent to preach in war-torn Uganda. R-rated high-jinks ensue.
Despite the copious obscenity and onstage violence, “The Book of Mormon” was a hit both with audiences and critics when it opened on Broadway in 2011. It went on to win nine Tony Awards, including best musical.
The show has been on the road since August 2012 — with two companies traveling the U.S. concurrently — and Ncube joined the first national tour in February 2014.
She plays the leading-lady role of Nabulungi, a sweetly naive villager who befriends the missionaries. Her big number is the hilariously dreamy ballad “Sal Tlay Ka Siti” (i.e. Salt Lake City), in which she envisions a paradise in faraway “Ooh-Tah.”
“The warlords there are friendly / They help you cross the street,” she sings. “And there’s a Red Cross on every corner / With all the flour you can eat!”
Over the summer, she got to perform the number in Salt Lake, the headquarters of the Church of Jesus Christ of Latter-day Saints, aka the Mormon Church.Advertisement

“That was actually one of my favourite stops,” she says.
“Everyone was so nice. I felt so safe there. And the audiences were insane. On opening night, we had to hold the show just for Elder Price’s doorbell ring at the top of the show.
“We had to hold it for a good 15 seconds because of all the cheering and singing.”
Despite the show’s controversial content, the tour was not greeted with protests.
“It’s written by the creators of ‘South Park,’ so it goes without saying that it’s going to be in your face with the satire,” Ncube says.
“But it’s amazing to me because even though there’s controversy, it’s more importantly a conversational piece.
Zimbabwe advantage
“People are talking about it, and while there are parts that are a little offensive, I think Matt and Trey brilliantly use satire to talk about really important issues.
“And I don’t find it to be just a roast of the Mormon faith. Any faith could be substituted.”
Ncube says she had a leg up on learning her character’s African accent because her father is from Zimbabwe.
She grew up in Tempe and became interested in acting after seeing “The Phantom of the Opera” at Gammage.
“I remember being terrified. I think I was in first or second grade,” she says.
She studied theater at Arizona State University and cut her acting teeth in the local theater scene. She performed in “The 25th Annual Putnam County Spelling Bee” with Mesa Encore Theatre and “Rent” at Scottsdale Desert Stages, and she made her professional debut in “Spring Awakening” at Phoenix Theatre.
“Book of Mormon” isn’t even her first national tour. Tempe’s Childsplay troupe sent her on the road in a “Schoolhouse Rock!”-like musical called “Rock the Presidents.”
“She’s sort of fearless,” says Anthony Runfola, who directed that show.
“She was coming in as the new person and had to keep up, and she didn’t even blink. … She brought such new energy to the role and made it her own.”
“Mormon,” of course, is a much bigger production, but Ncube says she settled into her new “family” instantly and has been enjoying life on the road.
“This job is a 24-hours-a-day, seven-days-a-week commitment,” she says. “We have to maintain our health and our physical shape, etcetera, so there’s definitely a portion of the day that’s specifically for that. But we do have time during the week to be tourists.”
Her favorite stop so far was Philadelphia.
“It was my first long engagement, seven weeks, so I felt like we were living there,” she says. “Just seeing all the different architecture — I’ve never been to a really old city before. And so much great food.
“I’m such a foodie, and I’m also a vegetarian, so it’s great to see how creative restaurants can be. They’re really good at making fake meat taste real. It’s almost like witchcraft.”
With three weeks in Tempe, there will be many more celebratory vegetarian meals to look forward to, including, of course, her wedding.
As for the bachelorette party, that’s up to Ncube’s best friend and maid of honor, fellow actress Aya Nameth.
“We’re total hippies,” Nameth says. “We’re probably going to go to Sedona and meditate and charge our crystals or somethings. That’s more our style than Mill Avenue and strippers.”
Ragtime Your Daddy’s Son – Alexandra Ncube