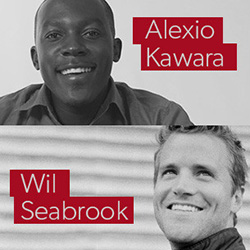 ZIMBABWEAN vocalist Alexio Kawara has joined up with accomplished US musician Wil Seabrook to and the band Rock For Human Rights on nationwide American tour to raise awareness about human rights through song.
Founded in 2011, the band began with the purpose of educating the public on the 30 human rights that everyone on Earth has according to the United Nations Universal Declaration of Human Rights, which was drafted by the United Nations over 60 years ago.
Throughout September and October, the band will be on tour across the country looking to spread their message through song.
The group recently made a stop at Springfield College in Massachusetts with Seabrook and Kawara making a huge impression on the crowd.
Their songs, which were a mix of folk and soft rock, conveyed the message of 30 human rights (which were all detailed in a small pamphlet handed out by Wil himself).
In between each song, either Wil or Alexio, who is visiting the United States for the first time, would step behind the mic and introduce themselves, or speak about their motives.
“When I first learned of these 30 human rights,” Alexio explained, “I knew that every human should have these at birth.”
The 35-year-old Zimbabwean grew up with four other siblings, all of who have a musical background as well.
Along with his musical group “Guess”, Kawara began releasing albums as early as 2000, and he began to gain steam as an artist, quickly becoming one of the most popular artists to come out of his the country, while his cultural music blends well with the rock-oriented styling’s of the rest of the band.
Commenting on the show first year Tommy Laydon said: “Frankly I think was an incredible performance.
“The incorporation of the other language and the diversity it embraced is similar to that of Springfield College. I think that could have been a deciding factor in signing them to play.”
Ben Ryan, another freshman added: “It’s hard to pinpoint one area of the show that was the best.
“The music itself was good, but the message it sends is even better.
“I think the lyrics were relatable, and they meshed well with the music, especially Alexio’s songs, even though they may have been in a different language.”
It’s easy to get up on stage and read just the facts about human rights. It’s also incredibly easy to bore someone to tears in that exact same fashion.Advertisement

Music; however, can peak the interests of many. It helps spread a vital message in a more relaxed manner, a way which is more receptive to people of all ages.
Rock For Human Rights will be continuing on in this lyrical-based mission finding alternative means to educate the masses on an important topic.