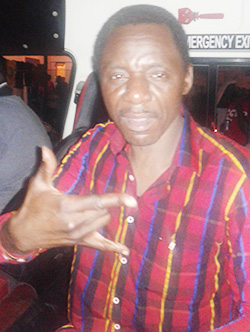 SUNGURA ace Alick Macheso and Zimdancehall maestro Winky D kicked off their two city South African tour in Durban Friday night with a spectacular show that left many speechless.
The show, which was held at the Belhaven Memorial Centre in Greyville, Durban, drew a massive crowd of Zimbabweans who were entertained by the two giants till the early hours of Saturday morning.
First on stage was Alick Macheso, who started his electrifying performance at about 11pm and was backed by his energetic Orchestra Mberikwazvo band.
Baba vaSharo, as the sungura guru is affectionately known, showed the crowd why he is still the king of the genre by belting out hit after hit which was a mixture of old and new stuff.
The crowd was a bit rowdy and several fights broke out but when Macheso sang his yester-year hit Madhuwe the crowd forgot about their squabbles and ran to the dancefloor, some even storming the stage, much to the frustration of the bouncers, whose serious faces would scare even mosquitoes and flies.
Macheso took that opportunity to showcase his extra-ordinary bass guitar playing skills whilst his dancers unleashed jaw dropping dance moves.
Despite the fact that Macheso was billed to perform in Cape Town on Saturday, he did not short-change revelers and performed all the way until the wee hours of the morning, belting out hits like Shedia, Baba naAmai, Tererai and giving snippets of his popular songs like Makandidana and Charakupa just to keep the crowd going.
The energy displayed by the Ochestra Mberikwazvo dancers, even after hours of performing was unbelievable.
Next up was the Zimdancehall maestro Winky D who did not waste time to deliver to the revelers a platter of a carefully prepared set.
But whilst his Vigilante band was busy setting up, the crowd was entertained by Durban-based dancehall DJ Redeye Mabande who dropped Ricky Fire’s ‘Ndiratidze Zvaunoita’ much to the delight of several members of the fairer sex, some of whom even let out the “Bev” in them.
Arguably the greatest Zimdancehall chanter at the moment, Winky D, clad in an Egyptian outfit similar to those worn by Pharaohs, managed to resuscitate several revelers who had succumbed to the effects of the golden liquids and brought them back to the dancefloor.
Backed by a four-man band, the energetic Ninja President gave the Durban crowd an unbelievable performance, considering it was his first ever show on the east coast of South Africa.Advertisement