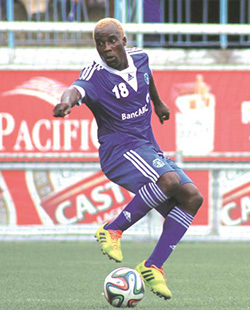 DYNAMOS are set to hand Stephen Alimenda, the arm band following the departure of Augustine Mbara who joined newly promoted South African Premiership side Highlands Park.
The Dynamos technical team was scheduled to meet and discuss the club’s captaincy on Wednesday but the team’s training was called off following a nationwide stay away which saw some workers failing to report for work.
The Harare giants’ coach Lloyd Mutasa however, said Alimenda who has been deputising Mbara could be handed the arm band.
“We will be meeting as technical team to discuss the club’s captaincy but you know Alimenda has been the vice-captain and he might be given the arm band.
“But it’s a decision that will be arrived at after we have met as a technical team,” said Mutasa.
The battle-hardened Alimenda arrived at Dynamos at the start of 2013, having played for several teams including Mwana Africa, Highlanders, Caps United and Hardbody.
Meanwhile, Mbara was snapped up by Highlands Park where he will join fellow Zimbabwean goalkeeper Tapiwa Kapini who helped the club win promotion into the topflight league.
He joined as a free agent after the Dynamos leadership failed to tie him down to a new contract after his initial contract expired last month.
His move to South Africa represents a big loss to Dynamos who will not benefit from the sale.
Mbara has also been instrumental in the revival of Dynamos who had a sluggish start to the campaign under former coach Paulo Jorge Silva before bouncing back into contention when Mutasa took over as coach following the sacking of the Portuguese coach.
Dynamos, who face Border Strikers on Sunday, are now in fifth place on the log standings with 20 points from 12 games following a brilliant run of four successive wins under Mutasa and his assistant Murape Murape.